Bookie Majeed had access to Yuvraj, Harbhajan and Ponting

Bookie Majeed had access to Yuvraj, Harbhajan and Ponting

The cricket agent Mazhar Majeed, who is at the centre of spot-fixing allegations, came up with a series of boasts to the undercover journalist who posed as an Indian businessman. 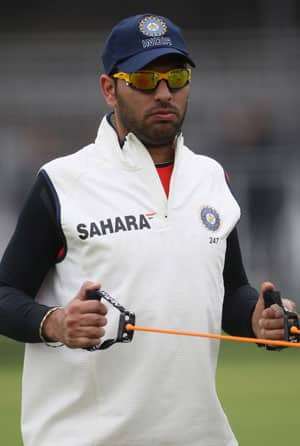 The cricket agent Mazhar Majeed, who is at the centre of spot-fixing allegations, came up with a series of boasts to the undercover journalist who posed as an Indian businessman.

He also claimed that he had several Pakistan players under his control, including Salman Butt, brothers Kamran and Umar Akmal, and Shoaib Malik and had access to other star cricketers like Chris Gayle, Brett Lee, Ricky Ponting, Harbhajan Singh and Yuvraj Singh, espncricinfo reported.

Majeed’s bragging was heard in a recording while Mahmood was in the witness box at Southwark Crown Court in central London, on the fourth day of the trial of Pakistan cricketers Salman Butt and Mohammad Asif, who have been charged with conspiracy to obtain and accept corrupt payments and conspiracy to cheat following the Lord’s Test in August. The two have denied the charges.

The boasting raised smiles of disbelief in the court as Majeed was heard to claim he owned seven ice cream parlours – which he has Pakistan players to appear at for free – and bragged how he lived at different times in Syria, Lebanon, Jordan, Malaysia and Turkey as he studied religion and gave lectures.

The court heard Majeed saying he was reluctant to work with former Pakistan captain Shahid Afridi because “you have to kiss his arse every day”. He also boasted of turning down the chance of being part of the Oscar winning movie ‘Slumdog Millionaire’.

Majeed said he worked closely with the Pakistan Cricket Board (PCB) and said he had a meeting with chairman Ijaz Butt about holding a domestic tournament.

“I had a meeting with Ijaz Butt about doing a domestic tournament. What we were going to do was look at putting a sponsor with each region and do a Twenty20 league because Pakistani people are not getting any cricket to watch. They will come in droves.” (IANS)

Australia's cricketing fortunes on the upswing under Michael Clarke