Pakistan bowled and fielded well to bowl Sri Lanka out for another low score of 239 in the first innings to finish the opening day of the second Test on top here on Wednesday. 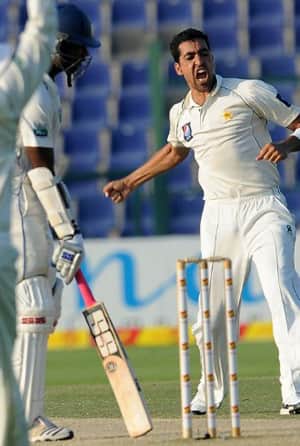 Pakistan bowled and fielded well to bowl Sri Lanka out for another low score of 239 in the first innings to finish the opening day of the second Test on top here on Wednesday.

Paceman Umar Gul (3-78) did the early damage in company with Junaid Khan (2-57) before spinners Saeed Ajmal (3-45) and Abdul Rehman (2-40) completed the job on a bouncy Dubai Stadium pitch.

Pakistan, who spurned a good chance to go 1-0 up in the three-match series with sloppy fielding in the first Test at Abu Dhabi last week, moved to 42-0 at close.

Openers Mohammad Hafeez (18) and Taufiq Umar (20) were at the crease on a day when Pakistani bowlers dominated yet again.

Sri Lanka, who chose to bat after winning the toss, slumped to 30-3 and then 154-8 despite a valiant 78 from Kumar Sangakkara before a ninth wicket stand of 75 between Chanaka Welegedara (48) and Rangana Herath (29) lifted them past the 200-mark.

Sangakkara, who celebrates his 34th birthday on Thursday, hit eleven boundaries and added an invaluable 54 runs for the sixth wicket with debutant Kaushal Silva (20).

But Sri Lanka’s batting, managing just 197 in the first innings in the first Test, failed yet again against a hostile pace-cum spin attack by Pakistan.

When Sangakkara looked set for another century he lost his concentration as he jumped down the crease to hoist Rehman straight into the hands of deep mid-wicket fielder Asad Shafiq.

Sangakkara, who also added 27 for the seventh wicket with Dhammika Prasad (seven), had defied the Pakistani bowlers during the first session in which Sri Lanka lost five wickets, three in Gul’s incisive first spell.

Gul said the pitch had moisture. “Our coach (Mohsin Khan) told us that there is moisture on the pitch so we bowled in the right areas and got the initial reward,” said Gul. “We are happy to get them out cheaply.”

Sangakkara showed disappointment. “Pakistan made good use of the new ball and it was a bit disappointing to lose early wickets but a good fightback took us to 239 and now we must keep Pakistan to a low total,” said Sangakkara.

Off his sixth delivery, Gul had the experienced Mahela Jayawardene (six) edging into the slips for Misbah to make two in two, leading by example in the slips after Pakistan floored seven chances in the first Test.

Khan, who took a career-best 5-38 in the first Test, had Dilshan caught in the slip and then Mathews caught behind by keeper Adnan Akmal.

Sangakkara dispatched Gul for his eighth boundary to bring up his 37th half-century before Rehman’s dismissed him and Silva in his first spell.

Sri Lanka were forced to make two changes from the first Test line-up, leaving Prasanna Jayawardene and Nuwan Pradeep to include Prasad and Silva. Prasanna, who made a fighting 120 in the first Test, had a abdominal strain.