The former pacer will be travelling to Sydney to attend his daughter’s graduation ceremony.

Pakistan cricket team new bowling coach Waqar Younis will not be with the side during the first ODI against Sri Lanka on September 27 in Karachi.

The former pacer will be travelling to Sydney to attend his daughter’s graduation ceremony, said the Pakistan Cricket Board (PCB) on Saturday.

Earlier this month, the PCB had appointed Misbah-ul-Haq as the team’s head coach while Waqar, who had earlier coached the Pakistan side, was named the bowling coach of the team.

“Pakistan bowling coach Waqar Younis will miss Pakistan’s first ODI against Sri Lanka in Karachi on 27 September as he will travel to Sydney to attend his daughter’s graduation ceremony,” said PCB in a media release.

He will join the team in Karachi ahead of the second ODI on September 29. The PCB said that the bowling coach has informed the board about his unavailability.

“Waqar will return in time for the second one-dayer on 29 September and join Pakistan men’s team in Karachi,” said PCB.

“Waqar had conveyed the Pakistan Cricket Board about this commitment prior to his appointment as the bowling coach,” concluded PCB.

Sri Lanka will be travelling to Pakistan for the three-match T20I and three-match ODI series. While some of the big names in Sri Lankan cricket – Lasith Malinga, Angelo Mathews and Dimuth Karunaratne among others – have refused to travel to Pakistan due to security concerns, the tour, despite the terror threat is set to go ahead. 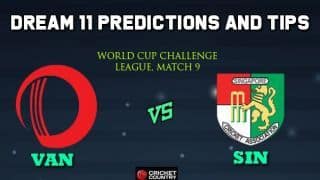