Centurion Ricky Ponting does not want Australia to "kill too much time" in their pursuit of putting up a huge first-innings total for taking 20 wickets could be hard work on a benign Adelaide Oval pitch. 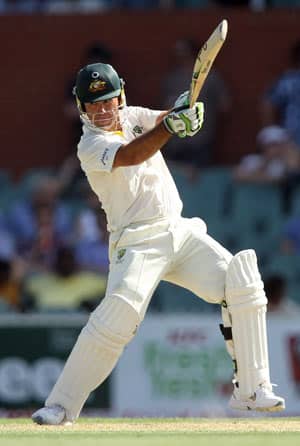 Centurion Ricky Ponting does not want Australia to “kill too much time” in their pursuit of putting up a huge first-innings total for taking 20 wickets could be hard work on a benign Adelaide Oval pitch.

“You have to be careful not to bat too long. It will be a tough wicket to take 20 wickets if you want to win this game.

We need to make sure we’re not killing too much time,” said Ponting who struck an unbeaten 137 and put on 251 runs for the fourth wicket with skipper Michael Clarke (140) on day one of the fourth and final Test against India.

Such was Australia’s domination that it raised questions about if it was the worst Indian attack he has faced Down Under.

“I don’t remember the attack from 2003-04. That’s a long time ago. I don’t think this is a bad attack at all. Zaheer’s one of the premier fast bowlers and has been for a while. But he has been down on match fitness and practice.

“Ishant is someone who has got me a lot in my career.

Yadav is someone up and coming. Ashwin, like we saw early this morning, has the capability to take early wickets with the new ball when there’s not much on offer for bowlers.

“I just think our batsmen in particular through this series have played particularly well. Most of the guys have put the hand up and made big runs. When you put that kind of pressure back on bowling attacks at different times every attack will look ordinary.”

After his century in Sydney, Ponting had said he wanted to really make a big one. He now has the chance to fulfill his wish against a lackluster Indian attack.

“I thought I played better today than I did in Sydney.

It’s probably a better wicket to bat on than Sydney. There was no sideways movement for the quickies. There was not a lot of spin. There was a little bit of reverse swing in the middle of the day.

“I see how I wake up tomorrow morning. I said the same in Sydney and let a big one get away there. I am not satisfied where I am at. As a player, you go through too many ups and downs in the career so I don’t want to let this one slip tomorrow.”

Despite his hundred, Ponting was still bombarded with his less-than-dominant approach, and questions were also asked about his retirement.

“That’s one of the things that is the difference between good players and great players. How does Sachin (Tendulkar) get up and go to training every day and work as hard as the young bloke coming through? It’s not for me. It has never been about making 13,000 runs or 40 hundreds. Winning games of cricket for Australia is what motivates me to keep playing.

“Am I not dominating? Well I scored my first 50 off 70 balls, didn’t I. I don’t think my style has changed too much.

I still get nervous before every innings and I think that’s a really good thing. If the day comes where I’m sitting in the change rooms and haven’t got sweaty palms before I bat then it probably means that it doesn’t mean enough to me.

“I thought I played better today than I did in Sydney. Am I still the player I was? I’m not sure. You guys can answer that. If I can keep making Test match hundreds or having an impact on winning games for Australia, then that’s what I’m all about at the moment.”

Ponting added that with time even great players like Tendulkar, Rahul Dravid and Jacques Kallis can make slight changes to their game.

“It’s probably interesting to ask the same question about Sachin or Dravid or Kallis, the guys who are the same sort of age as me and who are still out there playing Test cricket.

“We probably all realise we can’t play the same way forever right through our careers. I don’t think there’s been anybody who’s been able to do that through 160 Test matches.

“I’m giving my best shot to be the best player I can be and to win games for Australia and if I keep playing like I did today then hopefully there’s more runs around the corner.

I wouldn’t have been playing through the last few months if I didn’t think that I had some good cricket left in me.

The former skipper made it clear that he wasn’t continuing for any personal gain.

“I have had fair share of individual and team success, including winning world cups and big Test series. It’s not as if I’m striving for anything personally out of the game.?

“I wanted to be around and help guys out and get my cricket back to the level where I thought I could get it back to. This summer really has been pretty satisfying for me.”

Ponting was aghast when he was asked whether his fist-pump celebration was over the top and was indicative that he’s thinking of retirement.

“How did I know I’ll come here answer questions about my retirement? I haven’t scored a lot of those in the last couple of years which I have read a lot about lately as well. It’s always nice to make a hundred. It was a good celebration. I generally do a similar celebration most of the times.”

Ponting, nearly all through his career, has batted at number three, but he conceded batting at number 4 could actually prolong his career.

“It probably can. The last couple of years being the captain of the team and batting at three was getting more and more difficult for me. We were spending a lot more time in the field than probably I had done before and not winning as many games.

“Not being the captain now and having that little bit of extra time at the change of innings to sit back and relax and take it all has probably been good for me. So far, the way this series has gone though, there probably hasn’t been a great difference between number 3 and number 4.”

He was also asked if it was easy for him to accept that he is no longer the captain of the team.

“Both Clarke and I are grown-ups. I know my place in the team. Michael is the leader now. I’ve stepped back from all the responsibilities I once had. I am sure sitting in a corner and being told what I need to do anyway.

“There was negativity around from people in the outside.

I don’t think there was anyone within Australian cricket who had doubts about the way I am around to help the younger guys.

“I am around for advice if Michael needs it. I am not going to press myself on him. I am the number 4 batsman and the second slip fielder at the moment.”

The veteran batsman believed that the Australian dressing room was once again a fun place to be in.

“It’s always a fun dressing room when you win games. We had a few years when we didn’t win many games. Of late there is a great feeling around. There’s been some exceptional performance from young guys. David Warner has come in.

“When you see young guys come in like that it is a great place to be right now. We are all heading into the right direction. If we keep improving, then the sky is the limit with the sort of players we’ve got.”

Ponting’s vote went in support of Indian batsmen and Ishant Sharma who, despite beating the bat often, hasn’t been among the wickets.

“I actually thought in Melbourne and Sydney he bowled particularly well. He bowled better than the figures suggest.

That’s in batting as well.

“We know what they’re capable of as a group of players.

Their batting line-up is exceptional and has been right through the series so at some stage you’d expect that it’s going to fire.

“We’ve learnt a lot of lessons from playing Test matches at this particular venue over the last 10 years. It’s very much like the sub-continent here. A lot of things happen in Test matches very late in the game.”

Ponting hoped the hosts capitalise on the good start.

“We have to make sure that we capitalise on a good start and give ourselves the best chance of winning the game by making a big first-innings score. As the game goes on I think it’s going to get more difficult to bat on.

“Even today you saw a few balls not carrying through to the keeper. Hopefully, we’ll score our runs in a reasonable slick and see how we go tomorrow.”(PTI)