Hales has helped the Riders in the latter half of the tournament with significant contributions which saw them book a berth in the playoffs.

Rangpur Riders have suffered a major blow on Thursday with England batsman Alex Hales ruled out of the remainder of the Bangladesh Premier League (BPL) owing to an injury he picked up during the game against Rajshahi Kings.

The news was confirmed by head coach Tom Moody during a practice session at Mirpur. ”We got the news last night and he required going back to London to have some specialist opinion on his left shoulder,” Moody was quoted as saying by Cricbuzz. (ALSO READ: ABD’s fiery century leads Rangpur Riders to thrilling 8-wicket win)

”He hurt his left shoulder last game during his batting and not in fielding and the English Cricket Board requested that he get some further advice and get an MRI and scan,” he said

”Unfortunately, that’s the end of his tournament with us and obviously he had a significant impact and great value to us,” he added. (ALSO READ: Mustafizur Rahman s 3/28 helps Rajshahi Kings beat Chittagong Vikings by 7 runs)

Hales has helped the Riders in the latter half of the tournament with significant contributions which saw them book a berth in the playoffs. The Riders lost their opening four matches, but bounced back to win the next four matches on the trot due to Hales, who scored 85 not out, 100, 55 and 33 respectively. 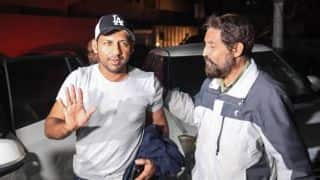