Wicketkeeper Brad Haddin has been ruled out of all five matches in Australia‘s One-Day International (ODI) series against South Africa, putting him in further doubt for next month’s Tests against India, Cricket Australia said Friday.

Haddin badly injured his shoulder while behind the stumps in Australia’s 2-0 Test series loss to Pakistan in the UAE and is battling to be fit for the first Brisbane Test, starting on December 4.

Physio Alex Kountouris said despite Haddin responding well to treatment, he was unable to return to training to prove his fitness for the series against the Proteas, which began in Perth on Friday.

“Brad has had a further assessment of his right shoulder by Cricket Australia Chief Medical Officer Dr John Orchard which confirmed an AC joint injury,” Kountouris said in a statement.

“He has improved and responded to treatment since returning from the UAE but has not recovered sufficiently to return to training. Therefore he has been declared unfit for the remainder of ODI series against South Africa. While Brad will miss the ODI series the CA medical team is still hopeful that he will recover in time for the first Test against India.”

The pressing issue for Haddin is whether he will be passed fit in time to play in the final round of Sheffield Shield matches prior to the Gabba Test.

Australia coach Darren Lehmann, a member of the four-man national selection panel, indicated Haddin would need to prove his fitness in competitive cricket before he could be considered for Test selection.

“He would have to play some cricket before the first Test starts,” Lehmann said.

“There’s a Shield game before the first Test, so if he misses all the one-dayers then he would probably have to play that I would think.”

Matthew Wade had originally been selected as Haddin’s replacement for the first two matches in the 50-over series against the Proteas and will be among a handful of serious contenders for the Test position. 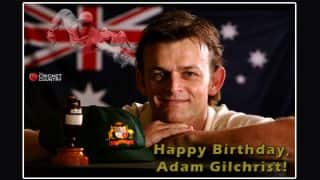 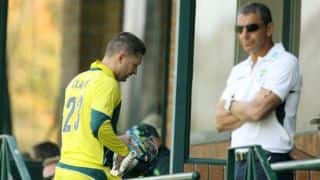