The veteran Australian cricketer has joined the BBL side as a player and assistant coach.

The signing had been considered for some time in BBL circles, and was confirmed on Tuesday by the South Australia Cricket Association (SACA), according to the official website of Cricket Australia (CA).

Hodge’s former Victoria team-mate, Darren Berry, said he is eager to see how the veteran is able to influence players in his dual role. “There are few players in the world who have the experience that Hodgey has. He is very generous with his knowledge and we can’t wait to see the influence he will have on our batting line-up.” Berry said.

Berry also said that Hodge is one of the best T20 strikers and he knows what it takes to thrive in this form of the game. Kane Richardson, Strikers’ frontline pacer is happy to be reuniting with his Indian Premier League (IPL) side Rajasthan Royals team-mate for BBL.

“It was great to be around him while with the Royals and I learnt a lot from him,” Richardson said. Richardson added that Hodge has played for over 20 years and player of his class are pretty rare to find.

Apart from Craig Simmons and Ben Laughlin, Hodge is the third new signing for the Strikers this season. The 39-year-old will take on his former teammates on December 18, when Adelaide Strikers host the Melbourne Stars to kick off the next edition of Big Bash. 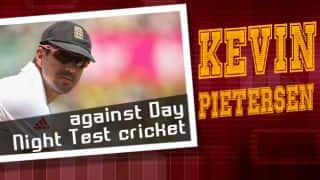 Kevin Pietersen not in favour of Day-Night Test cricket