Mavuta, 21, was playing his debut Test, and to finish with 4 for 21 is a testament to the promise he possesses.

Following Zimbabwe’s historic win against Bangladesh, most of the limelight was on Sikandar Raza for his six wickets in the match. However, one more players was equally deserving of all the praise for his immaculate performance with the ball in the second innings. While it was Raza, who removed three Bangladesh top order batsmen, young allrounder Brandon Mavuta took out the tail and finished with 4 for 21.

Mavuta, 21, was playing his debut Test, and to finish with such figures is a testament to the promise he possesses. His was the third-best innings figures by a Zimbabwe debutant, and to make an impact in Zimbabwe’s first Test win in five years is what made it sweeter.

“I think the adjustment from South Africa to Bangladesh required a lot of hard work,” Mavuta told ESPNcricinfo. “I am happy that it came out nicely in the Test match. The length is actually different from South Africa. It is a good spinning wicket, it doesn’t really bounce. You have to be on your work. They play spin better than South Africans so that was the massive difference. It is a great feeling.

“The only difficulty I faced was that I did not really know how much it is going to turn. You don’t know how much revs you have to put on the ball. You have to land in the right area and let the wicket do the rest. But it has boosted my confidence. It is a great feeling doing well on your debut.”

Impressed by the 21-year-old exploits, coach Lalchand Rajput didn’t hold back on his appreciation for the young allrounder. “Mavuta did exceptionally well in South Africa, but he didn’t have a good series here in the one-dayers,” he said. “I knew that as a legspinner he’s a match-winner. The only message was that he has to bowl his normal spin and not try to flight the ball too much. On a fourth-day wicket, you just have to put it in the right area.” 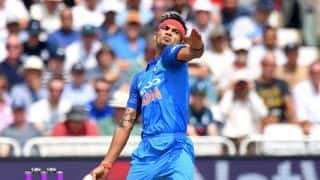