Pakistan have won the toss and elected to bat against South Africa in the second and final Test at Dubai on Wednesday. Pakistan have won the toss and elected to bat against South Africa in the second and final Test at Dubai on Wednesday.

The Proteas are without the services of their key batsman Hashim Amla who is with his for the birth of their child. They will under pressure to level the series trailing 0-1 in the two-Test series.

The wicket is expected to be a bit dry and assist the spinners as the game progresses.

Ahead of the game, South African skipper Graeme Smith had said, “I would love to see the graph going on an upward curve in this Test, from the batting perspective we need to be posting more solid totals and that is something we have prided ourselves on over a period of time.”

South Africa have never lost a Test series away from home since 2006. Back then they lost to Sri Lanka.

Pakistan are fielding n unchanged side. Dean Elgar will replace Amla and Imran Tahir  comes in for Robin Peterson. 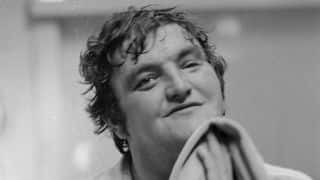