Brendon McCullum and BJ Watling shared a partnership of 352 runs against India.

Brendon McCullum and BJ Watling posted the highest-ever partnership for the sixth wicket in Test cricket history. The duo got past the record set by Mahela Jayawardene and Prasanna Jayawardene. The Sri Lankan pair added 351 runs against India at Ahmedabad in 2009.

Watling hit a delivery from Virat Kohli towards cover and got a single in the second ball of the 159.2 overs to break the record. But right after the record was broken, Mohammed Shami struck to dismiss Watling.

India had taken the new ball and Shami got one to hit Watling on the back pad. The Indians appealed and the umpire raised his finger. Watling was out for At the time of the wicket, New Zealand were at 446 for six in 160.2 overs. McCullum was 229. New Zealand lead India by 200 runs.

Below is a table showing the highest sixth-wicket partnerships in Test history. 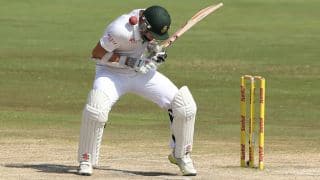