New Zealand have taken a six-run lead over India at stumps on Day Three of the second Test.

Brendon McCullum‘s century and BJ Watling‘s half-century has led New Zealand to take a narrow six-run lead at stumps on Day Three of the second Test against India. New Zealand are at 252 for five in their second innings in Wellington on February 16, 2014. McCullum is batting on 114 and Watling is on 52. Zaheer Khan has taken three wickets so far for India.

Only four wickets fell on the day. Three wickets fell in the morning session and one wicket fell in the second session. McCullum and Watling have added 158 runs off 370 deliveries for the sixth wicket.

The post-tea session began with New Zealand at 146 for five. McCullum played a lofted sweep shot to a delivery by Ravindra Jadeja to get a four towards mid-wicket. That got him his 29th half-century in Test cricket.

This was a completely different type of innings than one usually associated to McCullum. He was happy to just spend as much time in the middle without taking too many risks.

Zaheer then bowled a knuckle-ball from round the wicket to Watling. The ball bounced higher from a good length and took a big deflection off the batsman’s gloves. The ball went over the slips and Watling got two runs.

Mohammed Shami bowled a short and wide delivery and Watling played a cut shot for a four behind square on the off side. That helped him complete 1,000 runs in Test cricket. This is Watling’s 21st Test match.

McCullum then hit two fours in one over from Jadeja. The first was cut on the back-foot towards cover and the second was a drive through long-off. The ball had become old by that time.

The new ball was taken and MuCullum pulled the first ball from Zaheer towards long-leg for a four. Shami came in from the other end and McCullum greeted him with a lofted cover drive for a four.

McCullum reached 5,000 runs in Test cricket with two runs towards cover. He is also only the fourth New Zealand player to reach the 5,000-run mark. Stephen Fleming leads the way with 7,172 runs for New Zealand in Test cricket. Martin Crowe is second with 5,444 runs and John Wright is third with 5,334 runs.

He then played a brilliant drive off Shami towards long-off for a four. McCullum again hit a Shami delivery for a four through cover. He then hit a length delivery from Ishant over long-on for a big six to get to his century.

This was McCullum’s ninth century in Test cricket. In this innings, McCullum has gone past 1,000 Test runs against India. He is the only New Zealand player to do so. McCullum was also dropped twice in the second innings. Virat Kohli dropped him the first time at short mid-on when he was on nine and then Ishant Sharma dropped him of his own bowling when he was on 36.

Watling soon got his seventh half-century in Tests with a four through third-man. New Zealand then took the lead against India in the 94th over. The scoring slowed down after that and the duo batted along till stumps on Day Three. It was a great fightback from New Zealand in the end as the match heads into the fourth day. 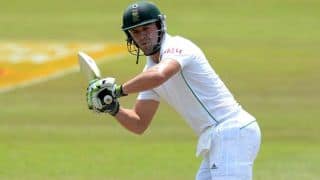