London: Former New Zealand captain Chris Cairns approached current skipper Brendon McCullum with a “business proposition” about match-fixing, McCullum told a London court on Thursday. McCullum, 34, told Cairns’ perjury trial that Cairns made the approach in a hotel in Kolkata, India in April 2008, explaining to him that other players “did not have the balls to do it”. McCullum said he was “shocked” by the approach and was contacted by Cairns regarding the matter a further two times that year before eventually reporting him to the cricket authorities in February 2011. Lou Vincent admits Daryl Tuffey threatened to kill Chris Cairns after not being paid

Former all-rounder Cairns, one of New Zealand’s greatest ever players, denies one charge of perjury and one charge of perverting the court of justice. Wicket-keeper batsman McCullum was playing alongside Australia’s Ricky Ponting for the Kolkata Knight Riders in the Indian Premier League (IPL) at the time of Cairns’ alleged approach. He told Southwark Crown Court that over a bottle of red wine and a curry in Cairns’ hotel room, Cairns had asked him if he knew “anything about spot-fixing in cricket”. Lou Vincent claims he fixed matches for Chris Cairns

McCullum said that Cairns had used a piece of paper to illustrate how spot-fixing worked, involving the manipulation of runs scored in a match, but not the result. According to McCullum, Cairns gave a “quite thorough” description of the practice, breaking down different periods of the game and noting when the match could be influenced. Asked by prosecutor Sasha Wass QC if it was a “legitimate” way to play cricket, Mr McCullum said: “No, it was not an honest game of cricket.”

He added: “I was shocked. I sort of thought he may have been joking, but I quickly became aware that he was not joking. He said that everybody is doing it, all the big boys are doing it. Will you take it on?” McCullum said that then-New Zealand internationals Daniel Vettori and Jacob Oram were both mentioned, but Cairns said “they did not have the balls to do it”.

He also said that “Asian names” had been discussed and that Cairns had told him that each incidence of spot-fixing could be worth “between $70,000 and $200,000”. McCullum said that Cairns had masked his income from spot-fixing by using it to buy property in New Zealand. The second approach from Cairns came in what McCullum described as a “pretty brief” telephone call, with the third approach coming while the men ate breakfast together in June 2008.

After the second approach, McCullum said that Cairns had told him: “Remember, this conversation never happened.” While McCullum admitted that he had not said no straight away after the initial approach, he eventually went to the anti-corruption authorities with information about Cairns in 2011. “Chris was a hero,” he said. “I did not feel threatened by his approaches.” McCullum explained that he had been moved to speak out after the New Zealand team were given a talk by the Anti-Corruption and Security Unit during the 2011 World Cup.

The charges facing Cairns relate to a libel case that the 45-year-old brought against Lalit Modi, the founder of the IPL, in March 2012. Cairns successfully sued Modi for £1.4 million ($2.14 million) after being accused of match-fixing on Twitter in January 2010, but now faces allegations that he lied during the case. A big-hitting all-rounder, Cairns played in 62 Tests for New Zealand and is one of the few players to have achieved the double of 200 wickets and 3,000 runs. He was named one of the Wisden Cricketers of the Year in 2000. 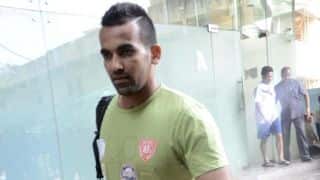