Brendon McCullum is only the fourth New Zealand player to cross the 5,000-run mark.

Brendon McCullum has completed 5,000 runs in Test cricket. He reached the milestone in the second Test against India in Wellington on February 16, 2014. This is McCullum’s 84th Test. He is also only the fourth New Zealand player to reach the 5,000-run mark.

New Zealand are at 217 for five after 85 overs in their second innings on Day Three. They trail India by 29 runs. McCullum is batting on 90 and BJ Watling is on 45.

McCullum came into the match with 4,909 runs in 83 Tests. He scored eight runs in the first innings. He was also dropped twice in the second innings. Virat Kohli dropped him the first time at short mid-on and then Ishant Sharma dropped him of his own bowling.

Stephen Fleming leads the way with 7,172 runs for New Zealand in Test cricket. Martin Crowe is second with 5,444 runs and John Wright is third with 5,334 runs. 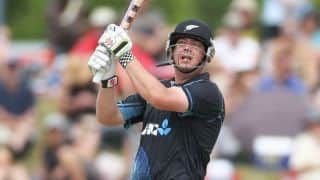