CSK are 38 for one after six overs.

In the Indian Premier League (IPL) 2014 game No 33 played between Mumbai Indians and Chennai Super Kings, Mumbai came back well after Chennai with Dwayne Smith playing shots started their innings on a good note. However, just at the right time Brendon McCullum clambered Jasprit Bumrah’s bowling. He smashed him for a six and a boundary as well.  They are chasing a target of 158 runs. The track though, is holding up a bit.

Praveen then got the crucial wicket off McCullum by getting him out lbw, but it was clearly going down the leg-side. Raina came into bat at No 3 position for CSK. Mumbai though, need more wickets to steam the flow of runs, otherwise, their chances of defending the IPL title they won last year will slip away quickly However, the drop catch by Apoorva Wankhede off Raina won’t help their cause.

Earlier, Dwayne Smith known for being naturally aggressive played some fine shots on the up. He looked in fine fettle, while facing pacers  from the opposition ranks. After the end of the first over bowled by Parveen Kumar itself, they were 12 for the loss of no wickets. Praveen though, came back well by bowling a fine second over. 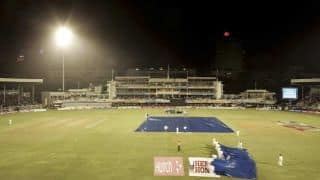