Brendon McCullum is nursing a back injury.

Brendon McCullum, New Zealand’s skipper, who is nursing a back injury is still not fully recovered and may miss out on the third ODI to be played at Saxton Oval, Nelson on Thursday. McCullum got injured while diving near the boundary line in the second limited-overs contest at Christchurch which the hosts comfortably won by 10 wickets. New Zealand is now leading the five-match ODI series 2-0 having won the first one day match as well. Earlier, they had also succeeded in orchestrating a clean sweep in the two-match Test series as well.

Mike Hesson, New Zealand coach was quoted by Reuters saying, “He’s still pretty sore. It’s unlikely he’ll play but he’s still a chance. Normally we talk about 24 to 48 hours [for recovery]. It’s probably closer to 48 than 24. He’s certainly improving but unless he’s good to go, we won’t risk him. He’s certainly one of those guys that if there’s a chance he can play he’d like to.” Talking of Kane Williamson’s knee injury, Hesson said, “Kane’s great. He was keen to play the last one but he was still pretty sore. He’s trained well today and recovered well.”

Hesson is also excited to have Corey Anderson in the squad for ICC World T20 2016, “We’ve got a plan in place for when we hope to have Corey back bowling. He’s getting closer, but we’ll be taking a precautionary approach. We’ve seen how dynamic a batsman he is and can threaten any bowling attack in the world. It’ll be great to have him back in the mix.” 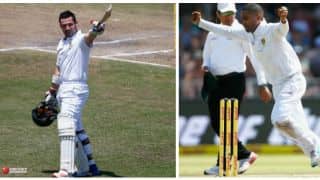