Brendon McCullum is known and feared for his aggressive style of batting.

Dashing New Zealand skipper Brendon McCullum has equalled a record that would not surprise most people. Adam Gilchrist, had smashed a hundred sixes in his 96-Test career and coming into the second innings of the game, McCullum needed only two sixes to get on par. Since the situation demanded fast hitting, McCullum had no hesitation playing his natural game. He smashed the very first ball he faced from Herath for six and he smacked another maximum three balls later and reached the record in doing so. McCullum will almost definitely get past that record given his style of play. Full Scorecard: New Zealand vs Sri Lanka 2015-16, 1st Test at Dunedin

McCullum is followed on the list by players like Chris Gayle (98), Jacques Kallis (97), Virender Sehwag (91) and Brian Lara (88). Given that most players on top of the list are retirees (and Gayle doesn’t seem likely to play another Test), McCullum has no immediate competition for the record. Among New Zealanders, he is followed by Chris Cairns (87), Tim Southee (55) and Craig McMillan (54) in terms of most sixes hit. Full Updates: New Zealand vs Sri Lanka 2015-16, 1st Test at Dunedin, Day 4

Meanwhile, the game that saw McCullum get to the record has New Zealand firmly affixed in the box seat. They set Sri Lanka a target of 405 runs before declaring with seven wickets in hand. They have already dismissed three Sri Lankan batsmen in response for a score of 109. The game was slightly affected by rain on Day Four, but New Zealand will hope for clear skies on Day Five in order to seal victory.

As seen in the table, no player with the exception of McCullum is an active Test player, which means his record is not under threat anytime soon. 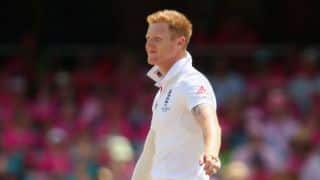