Brendon McCullum suffered an injury during the recent ODI series against Sri Lanka.

Auckland: Brendon McCullum said he expects to return to the New Zealand team for the deciding One-Day International (ODI) against Pakistan in Auckland on Sunday, however explosive opener Martin Guptill is now doubtful. Guptill twisted an ankle in training on Saturday and was rated by coach Mike Hesson as “a 50:50 prospect” of playing in the third and final match of the series. Captain McCullum, whose farewell tour has been disrupted since a back injury flared up five weeks ago, said he expected to play in the last match against Pakistan and then the Australia series in February before retiring. FULL CRICKET SCORECARD: New Zealand vs Pakistan 3rd ODI at Auckland

“I’ve had a good couple of hits,” he said of his work in the nets over recent days. It’s probably not 100 per cent but there’s a bit of stiffness so hopefully I’ll be fine for tomorrow.”

New Zealand, who beat Pakistan 2-1 in the Twenty20 International series (T20I), comprehensively won the first ODI by 70 runs with the second match washed out. While they need to win in Auckland to claim the series, Hesson said he would not risk Guptill if he is not fully fit. We won’t play him unless he’s fit. Twisted ankle is one of those ones he could wake up and be fine or it could be sore for 24-48 hours,” he said. Pakistan vs New Zealand 2015-16, 3rd ODI at Auckland: Preview

Tom Latham, who has opened for New Zealand in McCullum’s absence, will play if either McCullum or Guptill pulls out of the Pakistan match. He was also picked as standby cover in the ODI squad named Saturday for the Australia series in case McCullum breaks down again. New Zealand have been hard hit by injuries with Ross Taylor, Tim Southee and Mitchell McClenaghan all unavailable to play Australia and Hesson said that will test the depth of his squad. READ: New Zealand announce 13-man squad for Australia series; Brendon McCullum to lead

“This is a pinnacle event for us and we’ll look to get our best side out on the park each time we play. We’ve been lucky enough to use a big squad over the summer and although we’re missing a few key players, we have guys who can step in and we know are up to the task,” he said. 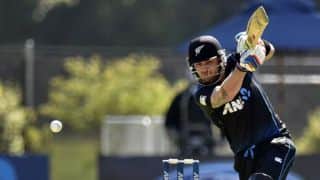