Brendon McCullum was at his belligerent best, treating pacer and spinner alike with disdain en route to his unbeaten 100.

McCullum and Dwayne Smith opened the innings, and got CSK off to a quick start. The duo added a rapid 75 for the first wicket in just over eight overs before Suresh Raina and McCullum added another 60 in just around five overs. Raina was very much the second fiddle though, contributing only 14 to the stand. McCullum was absolutely unstoppable, using his long handle with devastating effect. LIVE UPDATES: Chennai Super Kings (CSK) vs Sunrisers Hyderabad (SRH) IPL 2015 Match 4

MS Dhoni promoted himself to No. 4, but was off to a slow start, scoring only four off his first eight balls. He could take only three runs off the 15th over, bowled by Trent Boult. He managed to hit Bhuvneshwar Kumar for a big six over long on, but struggled a bit with his timing. When Karn Sharma bowled the 18th over though, Dhoni opened up in his inimitable fashion. He brought out the big hits, smashing two sixes off the first three balls before ending the over with the biggest six of the lot. Brendon McCullum scores 2nd IPL century against Sunrisers Hyderabad (SRH) in IPL 2015

Dhoni went on to race away to a 28-ball 50, dwarfing McCullum in their 63-run partnership. He was out in the final over of the innings, smashing one from Boult to David Warner at short cover. Ravindra Jadeja was the new batsman, but he was run out first ball — the third such dismissal in the innings — when Boult threw down the stumps at the non-striker’s end after McCullum scampered through to take strike. He hit a six and four to move to 99 before taking a single off the final ball to reach his second IPL ton. Chennai Super Kings (CSK) in IPL 2015: Kings of consistency look to rule again

With just one bowler taking a wicket, SRH were left ruing their decision to leave out Dale Steyn from the playing XI, choosing instead to go for IPL debutant Trent Boult. Dhoni decided to bat first at the toss, and CSK went in without making any changes to the team that beat Delhi Daredevils (DD) by one run. SRH went in with Boult, Kane Williamson, David Warner, and Ravi Bopara. Indian Premier League (IPL) 2015: Complete coverage 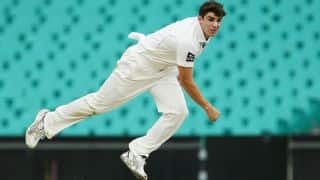