Former New Zealand Test skipper Brendon McCullum has admitted that his country's cricket was a mess when he took over the captaincy, insisting that his team collectively lacked character and had `no soul` at that time.

Melbourne: Former New Zealand Test skipper Brendon McCullum has admitted that his country’s cricket was a mess when he took over the captaincy, insisting that his team collectively lacked character and had `no soul` at that time. While speaking at the MCC Spirit of Cricket Cowdrey Lecture at Lord’s, McCullum admitted that he would have changed many things from New Zealand’s cricket if he had got the opportunity, news.com.au reported. Talking about his early stages of international career,McCullum revealed that he was proud to be called aggressive and arrogant at that time, saying that he became incredibly competitive to win the games.  ALSO READ: Former ICC ACSU chief defends processes after McCullum’s severe criticism

Now, McCullum has admitted that his team used to be full of blusters and that he looks back on that part of his game with regret. The 34-year-old, however, said that his side did realize that they need to change themselves and had to become humble, as well as hard working in order to earn respect from their oppositions. McCullum, who led New Zealand to their first World Cup last year, bid adieu to the international career in February after setting records for the fastest century and most sixes in Test history (107).

In his speech, he spoke about how the death of Phil Hughes affected him and the New Zealand team. The kiwis were playing against Pakistan that time, and the news of Hughes’ death broke them down from the inside. They did not have any strength to play the match. They told the match staff about the same, but ultimately did play the game. It’s a striking revelation by McCullum. New Zealand team looked sad throughout the match, and did not celebrate the fall of any wicket either. Though New Zealand ended up in winning the match, they never played to their full abilities bowling hardly any bouncers. Hughes’ death continued to play in their minds, and they played with very little intensity. 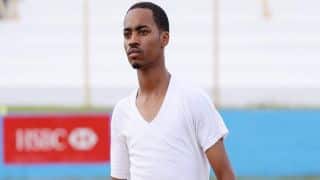