New Zealand are at 158 for five after 68 overs in their second innings on Day Three.

Brendon McCullum has scored a half-century against India in the second Test in Wellington on February 16, 2014. This is McCullum’s 29th half-century in Test cricket. New Zealand are at 158 for five after 68 overs in their second innings in the post-tea session on Day Three.

McCullum is batting on 54 and BJ Watling is on 26. McCullum has been a bit lucky in his innings as he was twice dropped. First was Virat Kohli at short mid-on and then Ishant Sharma of his own bowling. He got to his half-century with a sweep for a four towards mid-wicket off Ravindra Jadeja‘s bowling McCullum has struck five fours in his innings so far.

Corey Anderson was the only batsman to have been dismissed in the second session on Day Three. He top-edged one from Jadeja back for a simple catch. Anderson was dismissed for two off six deliveries. 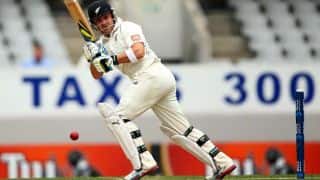 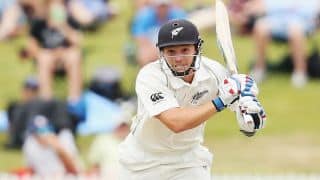