McCullum had faced questions about his future as he battles a long-standing back injury.

The 33-year-old, who led his side to a maiden World Cup final in March, has committed to the Black Caps until the ICC World Twenty20 in March-April next year. Brendon McCullum surpasses Chris Gayle as batsman with most T20I sixes

However, he will sit out next month’s limited overs tour of Zimbabwe and South Africa, citing a busy schedule in recent months, including the just-concluded tour of England.

McCullum had faced questions about his future as he battles a long-standing back injury, but he said he wanted to help the Black Caps maintain momentum. Brendon McCullum, Mike Hesson honoured for taking New Zealand to ICC Cricket World Cup 2015 Final

“It’s a critical time for the team. We’ve had a very good past 18 months but we’ve got some real challenges ahead of us and we need to keep making progress,” he said.

“This is a young, emerging side with some very big series on the horizon and it’s a really exciting time to be involved.” Brendon McCullum becomes second New Zealand cricketer after Stephen Fleming to complete 6,000 Test runs

New Zealand have home-and-away series against trans-Tasman rival Australia in 2015-16 and will also host Sri Lanka and Pakistan.

New Zealand Cricket chief David White said fans would be rejoicing at retaining McCullum, who has adopted an aggressive brand of cricket since he was appointed captain in late 2012. When Brendon McCullum stunned the world of cricket in opening IPL game

“Under Brendon, the Black Caps have enjoyed unprecedented success over the past 18 months. To have him remaining at the helm for another year is extremely good news,” he said. 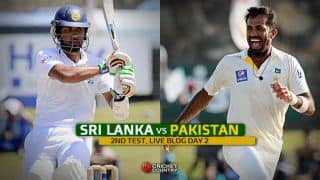