Former New Zealand skipper Brendon McCullum is set for his maiden coaching stint. As per a report in ESPNcricinfo, he will be appointed as assistant coach of IPL franchise Kolkata Knight Riders and head coach of CPL franchise Trinbago Knight Riders, the sister franchise of KKR.

The report emerged just couple of days after McCullum announced his retirement from all forms of the game. The 37-year-old has represented both the franchises during his playing days.

KKR, last month, had confirmed the exit of head coach Jacques Kallis and assistant coach Simon Katich. McCullum’s association with KKR family goes back to 2008, when he lit up the inaugural edition of IPL with an emphatic 158* in the opening game.

He later went on to play for Chennai Super Kings, Royal Challengers Bangalore and Gujarat Lions. After being released by RCB last year, McCullum did not find a buyer in auction for IPL 2019 and missed the season for the first time in his career. Although he was in India for commentary duties.

A veteran of 101 Tests and 260 ODIs, McCullum retired from international cricket in January 2016, two months before the T20 World Cup. He became a T20 freelancer and went on to play T20 leagues in the various parts of the world.

McCullum was set to represent Glasgow Giants as their icon player in the Euro T20 Slam but announced a shock retirement.

If appointed, McCullum will succeed Katich in both the franchises Katich was the head coach of TKR. KKR though are yet to take a call on their head coach’s post. England‘s head coach Trevor Bayliss was expected to make his comeback to KKR but he was roped in by Sunrisers Hyderabad, after the franchise parted ways with Tom Moody. 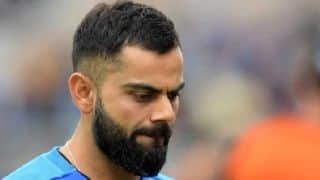