McCullum will link up with the Bears after New Zealand's tour of England with his first game against Lancashire Lightning.

Birmingham: New Zealand cricket captain Brendon McCullum confirmed Tuesday he has signed for the Birmingham Bears for the defence of their T20 Blast title. McCullum joins the Bears — Warwickshire‘s T20 name — on a seven-match deal after playing a major role as New Zealand reached the ICC Cricket World Cup 2015 final, where the Black Caps lost to co-hosts Australia.

“The Birmingham Bears had a great season last year, including winning the T20 Blast, and hopefully I can make a big contribution and ensure that we can progress in the tournament,” said McCullum. “Edgbaston is a fantastic ground to play at and hopefully it will be rocking for the big Friday night matches. I’m really excited about becoming a Bear and the challenge ahead.”

McCullum will link up with the Bears after New Zealand’s tour of England with his first game against Lancashire Lightning on June 26 at Old Trafford. He played a starring role at the top of the order in the Black Caps’ run to the World Cup final. Among his four half-centuries in nine matches was a destructive 77 off just 25 balls against England in Wellington.

Birmingham Bears director of rugby Dougie Brown said: “Brendon’s dynamic performances in the ICC Cricket World Cup have demonstrated once again exactly why he is one of the most feared batsmen in the game. “Securing his availability for our last seven games has to make him one of the biggest overseas player signings in the competition’s history.

“His power at the top of the order and experience of playing in big matches are great assets to bolster our already strong squad as we look to win through to the quarter-finals and defend our NatWest T20 Blast title.” McCullum is the leading run scorer in the history of T20 internationals, with 2,105 at an average over 35, with two centuries. 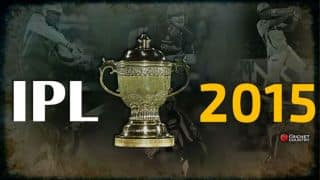