New Zealand lead India by 325 runs at stumps on Day Four of the second Test.

Brendon McCullum‘s magnificent double century in New Zealand‘s second innings has given them command of the second Test against India in Wellington on February 17, 2014. He was unbeaten on 281 at stumps on Day Four with James Neesham batting on 67. BJ Watling was the only wicket to fall in the day for 124 runs. New Zealand are at 571 for six.

In the course of the innings, McCullum has batted for the longest time for any New Zealand batsman. McCullum and Neesham also added 125 runs for the seventh wicket. Many records were broken and set on Day Four by the New Zealand batsmen. New Zealand lead India by 325 runs.

The post-tea session began with New Zealand at 440 for five. McCullum and Watling soon went onto break the world record for the highest sixth-wicket stand in Test history. The duo got past the record set by Mahela Jayawardene and Prasanna Jayawardene. The Sri Lankan pair added 351 runs against India at Ahmedabad in 2009.

Watling hit a delivery from Virat Kohli towards cover and got a single in the second ball of the 159.2 overs to break the record. But right after the record was broken, Mohammed Shami struck to dismiss Watling.

India had taken the new ball and Shami got one to hit Watling on the back pad. The Indians appealed and the umpire raised his finger. The duo had shared a 352-run partnership off 738 deliveries.

McCullum then struck a few fours square and straight down the wicket. Neesham too got two fours. One was hit wide of mid-on and the next was hit in the air towards long-on.

Shami then bowled a bouncer and McCullum played a brilliant hook shot. The ball sailed over the deep square-leg fielder for a six. McCullum reached the 250-run mark with those runs.

The partnership between McCullum and Neesham then got past 50 runs. Neesham then played a lofted cover drive for a four to a length delivery from Ishant to help New Zealand cross the 500-run mark.

Ishant bowled a length delivery and McCullum punched it through cover for a four. MS Dhoni brought Ravindra Jadeja back into the attack and McCullum came down the ground and lofted a six over long-on.

Rohit Sharma came into the attack and Neesham hit a four through mid-wicket and then down the ground towards long-off. 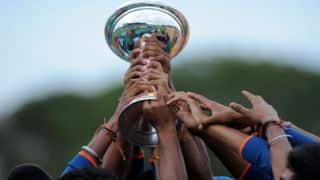 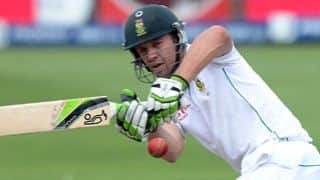