The two legends will play in this match which will be held prior to the CPL final.

Cricket legends Brian Lara and Ian Botham are set to take part in a charity game on August 12, 2014 at Warner Park, St Kitts. It will be an all-star charity Twenty20 match called the ‘Beefy Bash’ and it being held partnership with the Caribbean Premier League (CPL). This match will be held a few days before the CPL final in St Kitts, which will take place on August 16, 2014. Piers Morgan will also participate in this match and will play in Botham’s team.

Morgan was roped in for the match by Botham and more celebrities will be taking part in this charity match at Warner Park. Morgan though, hopes that if Brett Lee plays, he would be in his team. “I’ve already asked Brett Lee to join in, but this time playing with me – not breaking my ribs!,” Morgan was quoted in a press release issued by CPL.

Botham and Lara would be leading the two sides on the day. “I know how important cricket is to everyone in the Caribbean, and CPL has done a lot to reignite the region’s love for the game. St Kitts is an amazing island of rare beauty, full of wonderful people, and I’m excited to give something back to the country through this charity match, as well as getting the chance to watch the closing stages of the CPL,” Botham said.

This match gives the fans a great chance to watch Lara play, who retired from international cricket in 2007 and played his last competitive game in 2010. “I’ve seen first-hand the impact CPL has had on the region. Players and fans love it, it’s great for our up and coming talent, and it provides an economic boost as well,” Lara said.

“I’ve always believed in the importance of giving back to the Caribbean, and this match will be a great way to do that. It’s going to be fun to play with and against some old friends and reignite some old rivalries, and I’ve already been contacted by plenty of fast bowlers keen to have a bowl at Piers,” Lara was quoted.

The first edition of the CPL was held in 2013 where players from all over the globe featue. This year, the tournament is scheduled to begin on July 11 and will finish with the final at Warner Park on August 16. 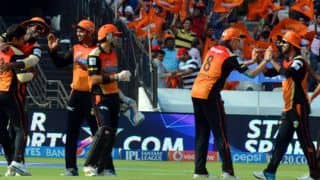