Brian Lara is the Brand Ambassador of CPL T20.

West Indies legend and the Brand Ambassador of Caribbean Premier League (CPL) T20, Brian Lara announced that he will give a cricketing “masterclass” to thousands of children from Trinidad & Tobago on the even of the CPL 2015 Final, which fals on July 25, according to a CPL media release. READ: Brian Lara and Dwight Yorke to take part in a charity match at St Kitts

Brian Lara is the leading run-getter for West Indies in Tests with 11,953 runs to his name. Lara also holds the record for the highest individual score in Tests (400 not out) and First-Class (501 not out).

Damien O’Donohoe, CEO of the Hero Caribbean Premier League, said, “Brian is a living legend and it’s going to be amazing to see the positive impact his masterclass will have on the local kids who will attend. This year’s CPL has seen thousands of children entertained and inspired by the best cricketers from the West Indies and across the world.” READ: Masters Champions League T20 to see Brian Lara, Wasim Akram and Adam Gilchrist in action

“The CPL players have attended schools across the region, speaking to the children about what it takes to make it to the top of whatever profession they choose. Brian’s masterclass will be the perfect way to sign off this programme of events with the children of Trinidad and, fingers crossed, we may even identify the next Brian Lara while bringing the biggest party in sport to the Queen’s Park Oval,” he added. 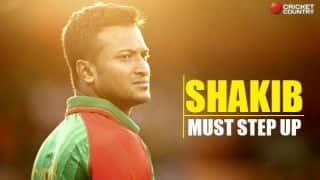 Shakib Al Hasan must step up to help Bangladesh be consistent