Videos filmed by the public showed a group trying to break through the gates between the main road and the stadium.

British police on Monday released photographs of eight men they want to trace over unprecedented trouble that flared during a ICC Cricket World Cup 2019 match between Pakistan and Afghanistan at Headingley.

Fans clashed inside and outside the ground during the close game between Pakistan and Afghanistan on June 29. Pakistan won the game by three wickets with two balls remaining.

What the hell is going on outside #leads ? Fight between Afghani and Pakistani Fans..#PAKvAFG #CWC19 pic.twitter.com/eqfIFS2z7u

Police said it involved a large group and three arrests were made, the BBC reported. Officers said they had “pinpointed four incidents of violent disorder” and were “keen to identify the suspects” after scouring CCTV and social media footage.

Videos filmed by the public showed a group trying to break through the gates between the main road and the stadium.

Fans were also seen jumping over the fence that surrounds the ground and gaining access to the concourse behind the Western Terrace, the report said.

Two of the arrested men were released without charge and the third one is currently on bail pending further inquiries, the report said.

West Yorkshire Police said it was called to the stadium shortly before noon on the day of the game following reports of a disturbance at the ground.

Detective Superintend Jaz Khan said the footage showed “people were assaulted during these incidents” despite no injuries being reported.

“Violent scenes like this are completely unprecedented at a cricket match,” he said. “It caused understandable concern to the law-abiding majority who were there to enjoy this high-profile sports events in peace.

“We simply cannot allow behaviour such as this to go unchallenged and we need to send a very clear message about how unacceptable it is for people to involve themselves in crowd trouble at sports events and that there will be consequences,” Khan said.

He appealed for anyone with information on “who these people are” to contact the force quoting ‘Operation Deeppond’ and urged people to share the released images.

“I would also appeal directly to any of the people shown in the images to contact us and arrange to come and speak to us about these incidents now before we come and arrest you once your identity is known,” he added. 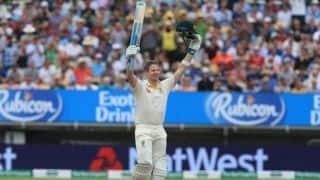