Stuart Broad tormented India again with a stunning counterattack as England recovered from a precarious position to post 221 in their first innings on an overcast opening day of the second cricket Test here on friday. 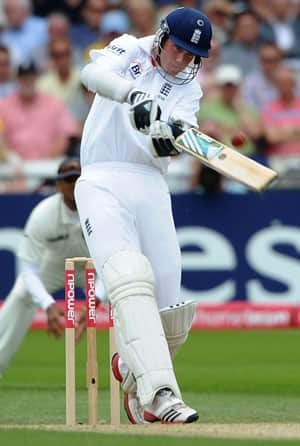 Stuart Broad tormented India again with a stunning counterattack as England recovered from a precarious position to post 221 in their first innings on an overcast opening day of the second cricket Test on friday.

Put into bat, the hosts were gasping at 124 for eight before Broad (64 off 66) used his long handle to great effect to guide England to a respectable total on the Trent Bridge wicket which assisted the fast bowlers throughout the day.

Broad found an ably ally in Graeme Swann (28) as the duo put up a face-saving 70-ball 73-run ninth wicket partnership to neutralise India’s splendid bowling display to some extent.

In reply, India, trailing 0-1 in the four-match series, lost opener Abhinav Mukund in the very first ball of James Anderson but experienced duo of Rahul Dravid (7 not out) and V V S Laxman (13 not out) steadied the ship to take the visitors to 24 for one at the close of an eventful opening day.

Dhoni’s gamble to field first seemed to pay off as the pace trio of Praveen Kumar (3/45), Ishant Sharma (3/66) and S Sreesanth (3/77) produced a splendid exhibition of seam bowling to rip through the English batting line up.

The Indian pacers were right on their money from the word go as they picked up two English wickets — opener Alastair Cook and Jonathan Trott early with just 23 runs on the board.

While Cook was caught plumb in front of the wicket by Ishant, Sreesanth induced an edge from Trott which Laxman gleefully accepted in the second slip.

Then came brief period of resistance from captain Andrew Strauss (32) and last match double centurion Kevin Pietersen (29) as they added 50 runs for the third wicket before Sreesanth picked up the latter with a gem of a delivery.

Indian pacers made the best use of the overcast conditions and seaming track in the afternoon session, grabbing as many as six wickets with England adding only 55 runs in 24 overs.

The trio of Praveen, Ishant and Sreesanth proved to be lethal in the second session as each one got two wickets a piece.

In the second session, Sreesanth accounted for Pietersen (29) and wicketkeeper Matt Prior (1) while Praveen got rid of England skipper Strauss (32) and Eoin Morgan (0) in the space of four deliveries.

England reeling under this onslaught could add only 19 runs to their lunch time score of four while losing the four wickets in the first hour of the second session.

Pietersen, who failed to cover the away movement of Sreesanth, edged one to Suresh Raina at third slip.

Praveen then managed twin-strike when Strauss (32) lost his patience and flashed at an away-going delivery to be caught by Raina again at third slip.

Praveen got his second victim three deliveries later when he trapped Morgan (0) with a delivery that didn’t do enough and hit the batsman on his pads. Although Morgan was unhappy but Hawk-eye showed that the delivery would have hit top of off-stump.

India could have had another scalp at 98 for six had Rahul Dravid at first slip clung on to a chance offered by Ian Bell on 22 off the indefatigable Praveen.

Dravid made up for this lost chance when he held on to a low catch offered by Tim Bresnan (11), this time off an Ishant delivery. England were now 117 for seven and in dire straits.

Bell (31) all this while had shown impeccable judgement in leaving the deliveries in corridor of uncertainty.

However running out of partners, there was a lapse in concentration from Bell as he chased an innocuous delivery to edge it Dhoni with the scoreboard reading 124 for eight.

With wickets tumbling from the other end, Broad then decided to use his arms and unleashed an array of stroke-play to take the task to the opposition.

In Swann, Broad found an able partner who was determined to stay on the crease along with him. The duo stitched a vial 73-run ninth wicket stand that took England past the 200-run mark, which at one stage looked impossible.

But just when it seemed the duo was finding it literally easy at the crease Swann got a snorter from Praveen in the 62nd over that took from good length and hit his gloves and then popped up for an easy catch for Abhinav Mukund at gully.

Harbhajan Singh (1/22) then wrapped up the English innings with the wicket of Broad, caught by Tendulkar at deep as the batsman went for a huge hit.

Youngsters losing focus on Tests because of Big Bash: Hodge

Australian cricketer Brad Hodge has expressed his concern that Twenty20 leagues such as Big Bash will distract young cricketers focus from Test format.

Cricket Australia has recently launched the Big Bash League, which will feature eight teams in the first edition.

The right-handed batsman Hodge, who has scored more than 17,000 runs in 223 First Class games at an average of 48.81 told The Age, “My whole life was founded on trying to play cricket for Australia at Test level and I wish the mental side of the younger player was the same, but I’m just not sure it is. Most of the talk around here is about this Twenty20 competition no one gives a toss about the other two forms of the game at the moment,”

“It’s hard for me to think about what a young player would want, but the few I have spoken to, what they want is to play IPL, to play Twenty20, and Test cricket is probably not right up there.”

“The reality is that people want to play Twenty20 and the public want Twenty20 and I’m not sure people are going to be interested in watching Test match cricket or one-day cricket as much as the administration say they are going to protect [Shield cricket], I think it’s going to fall away and become obsolete.”

Hodge played only six Test matches for Australia, and scored 503 runs at an average of 55.88.