Cheema, who has a big-hitting reputation, set about punishing the England bowlers and ignited visions of an upset win, forging useful partnerships with Zubin Surkaria and Khurram Chohan before his dismissal set them back. 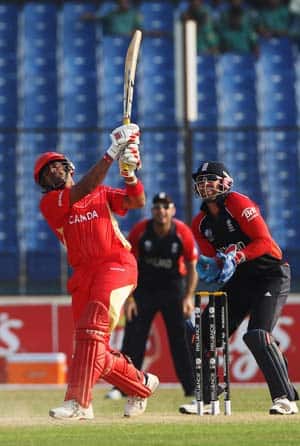 Stuart Broad warmed himself nicely for the World Cup with an impressive five-wicket haul as England overcame an onslaught from Rizwan Cheema to pull off a narrow 16 run victory over Canada in a warm-up game at the Khan Shaheb Osman Ali Stadium in Fatullah on Wednesday.

Broad struck a decisive blow when he removed Cheema who had put the England bowlers to the sword with a blistering 71-ball 93, studded with ten fours and five sixes.

Cheema walked out to bat with Canada in troubled waters at 28 for 5 after Broad had earlier inflicted top-order damage, nipping out Nitish Kumar, Ruvindu Gunasekera and captain Ashish Baga.

Cheema, who has a big-hitting reputation, set about punishing the England bowlers and ignited visions of an upset win, forging useful partnerships with Zubin Surkaria and Khurram Chohan before his dismissal set them back.

Chohan took charge after Cheema s departure, batting responsibly with the Canadian tail to score a valiant 44 before he became Broad s fifth scalp as they were all out for 227 in 46.1 overs.

Earlier, Matt Prior and Jonathan Trott hit crucial half-centuries as England were all out for 243. Prior and Trott saved England s blushes, raising 54 runs for the fifth wicket the highest stand of the innings after seamer Khurram Chohan struck thrice early after skipper Andrew Strauss chose to bat first after winning the toss.

Chohan showed the pavilion way to Andrew Straus in the second over to gain the early upperhand for the minnows before giving Canadians more joy snaring the wickets of big-hitting Kevin Pieterson and Ian Bell to have England in a spot of bother at 64 for 3 in the 15th over.

It was largely due to the batting efforts of Prior and Trott that England were able to post a respectable score. Prior made 78 off 80 balls, punctuated with four fours and one six while Trott scored 57 off 81 balls, studded with four fours.