Laird believes modern-day sledging is getting out of control.

Slamming the current culture of sledging in Test cricket, former Australian batsman Bruce Laird has claimed that it is only a matter of time before it would lead to an on-field physical brawl. Laird, who played 21 Tests for Australia between 1979-92, scoring 1341 runs at 35.30, had been known for his courage and remains a well respected figure in cricket, particularly among the West Indies pace attack who he regularly stood up to.

Laird, who has no official role in cricket today, but still retains a passion for the game, said that these days they sledge 10 times as much as his time in the game and it’s getting out of control, news.com.au reported. He added that they never said anything, claiming that it would get to the stage where a fieldsman would get a bat wrapped around his around his head. Laird claimed that if someone had said something to him, he would have had a go at them.

Laird said that what one found in the 1970s-80s were bowlers like Jeff Thomson never tried to hurt a player, adding that he wasn’t that sort of bloke. He claimed that everyone seems to think Ian Chappell started it, but added that the former skipper was actually very much against it and Rod Marsh the same.

Laird claimed that Chappell was really strong on fieldsmen shutting up and bowlers never getting personal, adding that he had no problem with a bowler calling a batsman a lucky so and so, but none of the stuff one sees these days. Now, he claimed that it’s very ugly and one would find kids copying it. Laird insisted that something has to be done and the players have to be pulled into line.

Sledging has become common practice at Test level with the Australian team openly admitting during the week that they would continue the practice into the Sydney Test starting on Tuesday, January 6, the report added. 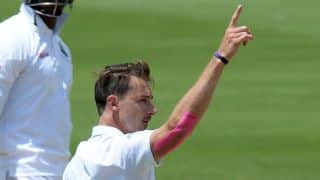