Pakistan's banned trio of Salman Butt, Mohammad Asif and Mohammad Aamir have been granted legal aid by the United Kingdom legal aid services commission after they requested for it to fight their case in British courts. 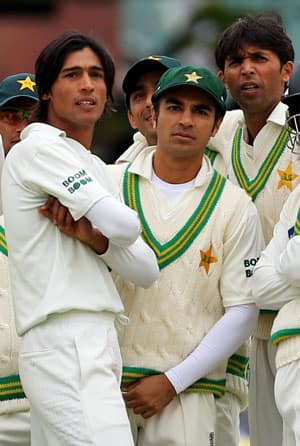 Pakistan’s banned trio of Salman Butt, Mohammad Asif and Mohammad Aamir have been granted legal aid by the United Kingdom legal aid services commission after they requested for it to fight their case in British courts.

The Crown Prosecutor’s Services (CPS) special crimes division has charged the trio and their Pakistani-British agent Mazhar Majeed with conspiracy to commit fraud and cheating during the Lords Test last year against England.

The first formal hearing of the case will be heard at the Southwark Crown court on May 20, for which Asif has already left for London while Aamir is awaiting his visa.

According to a report in The News, a spokesperson of the legal aid commission said that although the accused trio are foreign nationals they are being charged in an English court of law so they can apply for legal aid.

The spokesperson added that they can apply for legal aid under the same means testing as any person from the United Kingdom.

“The means testing ensures that those who can afford to pay towards the costs of their defence do so,” he said.

Nishtar Saleem, partner at Saracens solicitors in London explained that as the cricketers have been charged with what amounts to serious and imprisonment offences, they are entitled to apply for and be granted public funding to defend themselves.

“Remember the English law — these cricketers like everyone else are presumed to be innocent until proven guilty.

If they are found guilty of the offences charged against them, the legal services commission may demand that they contribute to their own legal costs so it is likely they will have to dig into their own pockets to pay part of the legal costs themselves,” he said.

The Pakistan Cricket Board is not providing any legal assistance to the trio, insisting it is a matter between them and the CPS.

The legal advisor of the board Tafazzul Rizvi said that under the ICC laws, no cricket board can provide any financial assistance to any banned player.

The trio have also been banned for five years by the special anti-corruption commission of the ICC for spot-fixing during the Lords at a hearing in February in Doha.