CA-ACA dispute: David Warner feels his views won’t be held against him

CA-ACA dispute: David Warner feels his views won’t be held against him

David Warner feels voicing his opinions during the pay dispute would not affect his Test captaincy chances.

The pay dispute between Cricket Australia (CA) and Australian Cricket Association (ACA) had left many Australian cricketers unemployed. Where some resorted to baseball, few considered golf as an alternative sport. Some cricketers even voiced their opinion on the pay dispute and one of the prominent names was David Warner. The Reverend voiced his opinion twice one where he thanked his family for showing support during these tough times and the second time he posted an emotional message on the importance of the Baggy Green and explained the tough times Australian players were going through. Since the pay dispute is now in place, Warner feels his opinions during the dispute will not go against him by those in power. David Warner accuses Cricket Australia of wrongly blaming players for not resolving pay dispute

In a chat show on Channel Nine, Warner expects all the bitterness should be forgotten and the focus should be on the upcoming games. Warner also feels voicing his opinions during the pay dispute would not affect his Test captaincy chances as well, I highly doubt that. From where I sit I was just doing what I had to do, which was necessary, and be the frontline for all the players. Being the captain of the side, Steven Smith too had posted a lengthy emotional message on behalf of his entire team. However, it was Warner who was more vocal during the entire fiasco. But Warner revealed why Smith did not say much apart from that long Instagram message, We spoke a couple of times on the phone. We sort of had an understanding of where we wanted to be at certain points.

Australia will now travel to Bangladesh for their 2-Test series, which begins on August 27. Apart from the Tests, BBL franchises have already begun the preparations by signing and shuffling players for the upcoming edition. 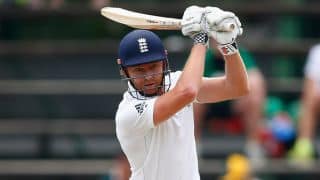 England vs South Africa, 4th Test: Jonny Bairstow annoyed after getting out on 99