England are resigned to being without Ben Stokes for the whole of the Ashes series and it will be fascinating to see whether they can replace him — and win without him — against Australia. Stokes, who was vice-captain to Joe Root, did not fly out with the rest of the squad after a late-night incident in which he appeared to get involved in a fight outside a Bristol nightclub in September.

Recently, there has been speculation that the 26-year-old all-rounder, often compared to former Test great Ian Botham, could return in time for the third of a five-Test series. But with the England and Wales Cricket Board (ECB) still waiting to discover if he will be charged by prosecutors, Stokes’s Ashes participation remains uncertain.

Stokes’s combination of skills — powerful left-handed batting, lively seam bowling and brilliant close-catching, allied to an ability to inspire his team-mates — make him one of the most highly prized players in world cricket today. They also help balance the side, with England able to play an extra specialist bowler without weakening their batting. Such is Stokes’s importance to England that many pundits believe they cannot win the Ashes without him.

“Stokes is two things – he’s a class above the rest, and he’s such a match-winner that he drags the team along with him,” former Australia captain Ian Chappell told the Wide World of Sports. “If he gets things right and plays really well, he’s the sort of player who can lift the rest of the team. Without him they (England) are no chance (to win the Ashes),” he added.

Stokes’s ability to shine even in the most difficult of circumstances was seen when he made his maiden Test century against Australia in Perth during the 2013-2014 Ashes series, where England suffered a humiliating 5-0 defeat. This year Stokes, a genuine all-rounder, became the Indian Premier League’s most expensive foreign player when he was signed by the Rising Pune Supergiant for 1.7 million ($2.2 million). He justified the price tag by scoring 316 runs at a strike rate of 142.98, and taking 12 wickets at 7.18 in the Twenty20 event.

But if Stokes wins big, he can lose big too — notably when Carlos Brathwaite hit him for four successive sixes to snatch a stunning win for West Indies in the last over of the 2016 World Twenty20 final. Stokes, however, often demonstrates more guile than is suggested by his all-action approach. Nevertheless it is the blistering displays that have been the most eye-catching.

The 2015 Lord’s Test against his native New Zealand — he was born in Christchurch but moved to England with his family as a boy — saw Stokes’s innings of 92 and 101 help England regain the initiative, with the Durham man taking three wickets as well.

He also compiled a remarkable Test innings of 258 from just 198 balls against South Africa in Cape Town in 2016. Stokes can make an impact with the ball too, as he showed while taking six for 36 during an Ashes-clinching victory against Australia at Trent Bridge two years ago. His fiery temperament was laid bare when he punched a locker and broke a bone in his right hand after a dismissal in 2014, forcing him to miss that year’s World Twenty20 in Bangladesh. England thought that making him vice-captain to Root, a friend since their days in youth cricket, would add an extra layer of maturity, with coach Trevor Bayliss calling him “a leader within this group when it comes to cricket”.

Chris Woakes is the nearest England have to a like-for-like replacement in their squad to Stokes. Now England will hope that the Warwickshire seam bowling all-rounder’s surname is not the only thing that is similar to their absent friend 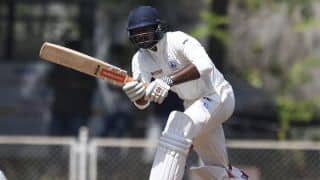