WICB said Brathwaite along with Test batsmen Darren Bravo and Marlon Samuels had all opted not to sign retainers for the period that ends in September 2017.

Antigua: West Indies Twenty20 captain Carlos Brathwaite is among the three players who have declined central contracts from the West Indies Cricket Board (WICB). The board said Brathwaite along with Test batsmen Darren Bravo and Marlon Samuels had all opted not to sign retainers for the period that ends in September 2017, reports CMC. Brathwaite’s move is significant since he only assumed the helm of the T20 squad last August, controversially replacing two-time Twenty World Cup-winning skipper, Darren Sammy. The 28-year-old is also a member of the One-Day International (ODI) and Test squads, but has been unable to command a spot in the longest format despite a batting average of 45 after three games. FULL CRICKET SCORECARD: Pakistan vs West Indies, 3rd Test at Sharjah

Brathwaite is set to play for Barisal Bulls in the Bangladesh Premier League (BPL), which bowls off this weekend and is also expected to sign for a franchise in the Big Bash League (BBL) starting next month. Bravo, meanwhile, is the Windies leading batsman in Tests where he averages 40 from 48 Tests. The last of his eight hundreds came in the second Test in the historic day/night first Test against Pakistan in Dubai a fortnight ago. The left-hander is currently a member of the ODI squad but not the T20 unit, and unlike many of his peers, does not campaign in the plethora of T20 domestic leagues across the globe.

Samuels, at 35, is in the twilight of his career and his recent form in the Test series against Pakistan has suggested the tour may be his swansong. He remains an important member of the ODI and T20 squads and like Brathwaite and Bravo, is part of the squad for the Tri-Nations Series against Sri Lanka and hosts Zimbabwe starting later in November. FULL CRICKET UPDATES: Pakistan vs West Indies, 3rd Test at Sharjah

Samuels is set to turn out in the BPL for Comilla Victorians. Meanwhile, 19-year-old fast bowler Alzarri Joseph has landed a central contract along with 22-year-old batsman Shai Hope and the 24-year-old left-arm spinner Jomel Warrican. Joseph, a member of the West Indies Under-19 squad that captured the Youth World Cup in Bangladesh earlier this year, made his debut against India last August.

He is currently a member of the Test squad on the Pakistan tour. Hope, who debuted against England last year, has played seven Tests while Warrican has played four Tests, following a debut series against Sri Lanka in 2015. Central contracts for men’s players are worth between $100,000 and $150,000. 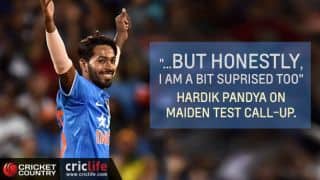