Dilshan remained the highest scorer of the innings with a score of 101.

Opening batsman, Tillakaratne Dilshan helped Sri Lanka finish on 302 for the loss of six wickets against England in the seventh and final ODI at the R Premdasa Stadium in Colombo on Tuesday. He remained the highest scorer of the innings with a score of 101.

Earlier during the day, Sri Lanka skipper, Angelo Mathews won the toss and elected to bat first. Opening batsmen Dilshan and Mahela Jayawardene were off to a good start as they brought up the opening 50-run stand. However, at the score of 55, it was Jaywardene who departed for 28 after being dismissed by Harry Gurney. He left the field with a warm ovation from the crowd as a result of being his last home match.

Following his departure, Dilshan and wicketkeeper-batsman, Kumar Sangakkara put up a 65-run stand for the second wicket before Sangakkara was dismissed for 33 off Moeen Ali. He too received the same ovation form the crowd for the same reason. Followed him was skipper, Mathews who departed for mere 20 after being bowled off Ali while Dilshan brought up his 42nd ODI half-century.

However, Sri Lanka did not panic and it was Dilshan along with Dinesh Chandimal who put up a big 80-run partnership to take Sri Lanka’s score to 236. Eventually, Dilshan scored his 12th ODI century and also completed his 9,00o ODI runs. He fell for 101 to Chris Jordan after being caught off Ali. Chandimal too later went on to score his 12th ODI half-century.

However, the damage was yet to be done as it was the explosive innings of all-rounder Thisara Perera who smashed it all over the park and brought up his fifth ODI half-century in just 23 deliveries. Both the batsmen went on to put up a 40-run stand for the fifth wicket.

The final over saw a couple of breakthroughs as Perera and Seekkuge Prasanna were dismissed by Chris Jordan. However, the damage was already done by Perera who departed after scoring an explosive innings of 54 off 26, while Prasanna was run-out for a duck without facing a delivery as Sri Lanka finished on 302, leaving England with a target of 303 to win the final encounter. 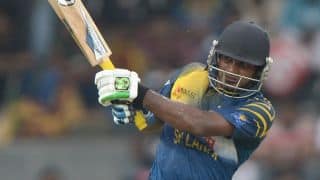