Matthew Wade, who missed the Chappell-Hadlee series opener against New Zealand, is no guarantee to be a part of the team for the next match as well to be played in Napier on February 2.

Auckland: Wicketkeeper-batsman Matthew Wade, who missed the Chappell-Hadlee series opener against New Zealand, is no guarantee to be a part of the team for the next match as well to be played in Napier on February 2. Wade – appointed stand-in captain was ruled out of Auckland ODI, which Australia lost by 16 runs, due to a back complaint. Explosive opening batsman Aaron Finch took over the leadership duties in Auckland, while Peter Handscomb stood behind the wickets. “Matthew injured his back at the end of Sunday’s training session and, with the short turnaround between then and the start of this match, he was not fit enough for today as, when we checked him out this morning, he was unable to perform at the appropriate level,” Dr John Orchard, Cricket Australia’s chief medical officer was quoted as saying by ESPNcricinfo.

We will make a decision on his availability for Thursday’s match in Napier in due course but at this stage our expectation is that this is a short-term injury, he added. Wade s injury, however, allowed Sam Heazlett to make his international debut. “I’m hugely disappointed but after getting checked out this morning I knew I would not be able to play,” Wade said. FULL CRICKET SCORECARD: New Zealand vs Australia, Chappell-Hadlee Trophy, 2nd ODI at Napier

“I wish Aaron all the best as captain in my absence and I’m delighted for Sam Heazlett, making his international debut, he added. The Black Caps, earlier on Monday, held on their nerves to defeat Australia in a cracker series opener here at Eden Park. For Australia, all-rounder Marcus Stoinis kept on his side’s hopes of clinching a miraculous victory by scoring a brilliant hundred but was the last man to get out, thus bringing end to a cracker of a game. Chasing a target of 287, the visitors were all in tatters at 67-6 before a brilliant century from Stoinis in only his second one-day international took them to the brink of the most unlikely of triumphs. 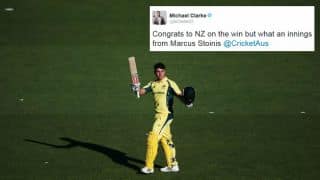