With IPL and Indian cricket facing one of its biggest crisis as the curse of spot-fixing broke loose entangling both players and a section of the officials, the magnificent crowd of Eden Gardens today bestowed faith on the game by filling up the stands to the brim. 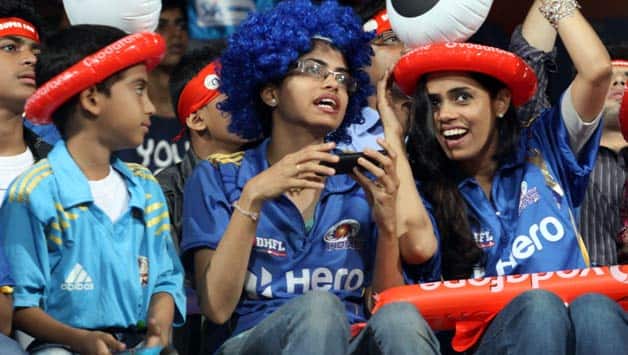 With IPL and Indian cricket facing one of its biggest crisis as the curse of spot-fixing broke loose entangling both players and a section of the officials, the magnificent crowd of Eden Gardens bestowed faith on the game by filling up the stands to the brim.

With S Sreesanth and two of his team-mates being arrested on the charges of spot-fixing, the muck of betting has engulfed India in the last few days, where cricket is treated as a religion, with not only just cricketers but also officials like Gurunath Meiyappan, the son-in-law of BCCI president N Srinivasan being arrested on the same charges.

But the jampacked stands of Eden Gardens during today’s IPL 6 final between Chennai Super Kings and Mumbai Indians seems to have proved that for cricket loving common people it is the game that is more important than the mud of fixing.

Since last few days long queues were seen at several points of the city where tickets for the final match were sold.

The dynamic swarm at Eden Gardens danced and sang to the official song of IPL when Mumbai Indians openers came down to bat.

Although Kolkata Knight Riders is the home team, but the crowd lustily cheered, whistled and danced for both MI and CSK players at the 95 per cent filled Eden Gardens.

The scanty dressed cheerleaders fuelled the mood as they danced and waved to the exhilarating crowds with every boundary being hit by MI.

Going by the colour of the crowd it seems Mumbai Indians was more favourite than CSK among the Kolkatans.

However a section of the crowd felt that bigger the controversy is bigger will be the crowd.

“People going by nature loves sleaze, controversy and IPL provides you with this potent cocktail. So more the controversy bigger the crowd,” said Arindam Roy, a spectator.

Kolkata in the last few days has witnessed small protest rallies of cricket lovers, with the demand of removal of Srinivasan from the post of BCCI president.

Although, Kolkatans were cheering for the game but BCCI president Srinivasan was seen visibly tensed at the hotel lobby in the morning.

With his son-in-law in a fix, tensed Srinivasan was seen moving in and out of a room where a BCCI meeting was scheduled to be held today.

Srinivasan, dressed in white pants and sky blue shirt, was first spotted inside the hotel lobby at around 1.30 pm, just after the scheduled lunch of BCCI officials got over.

After 10 mins BCCI officials and politicians such as Rajeev Shukla, Anurag Thakur and Arun Jaitley were seen on the hotel lobby on their way to their rooms.

Srinivasan, along with another official was seen moving towarads the lift on his way upstairs.

After about 15 minutes, he was seen coming down and moving towards the scheduled meeting room of BCCI.

But according to BJP leader and president of Himachal Pradesh Cricket Association (HPCA), Anurag Thakur, no meeting had taken place today.