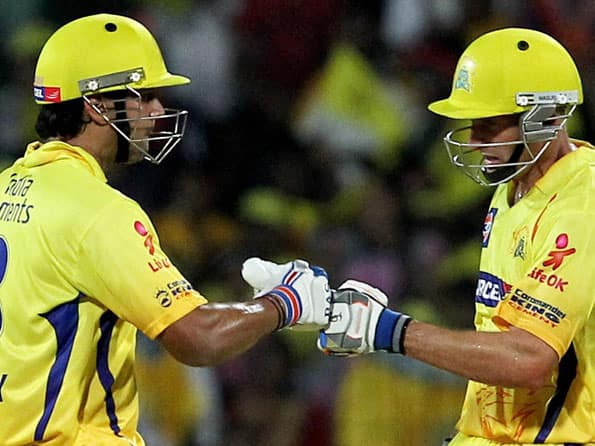 Chennai Super Kings (CSK) bowlers exposed the vulnerability of the Delhi Daredevils‘ (DD) top-order as the defending champions thrashed the current table toppers by nine wickets in an Indian Premier League (IPL) match at Chennai. With that Chennai moved to the fourth position in the points table.

Opting to bowl on a track where the ball did a fair bit during initial stages, CSK bowlers led by Ben Hilfenhaus restricted Daredevils to a meagre 114 for five.

The emphatic victory with 28 balls to spare also ensured that CSK with 15 points moved upto fourth spot ahead of Royal Challengers Bangalore.

It was Hilfenhaus who set up the convincing win by polishing off the top three batsmen in the opposition line-up in his first spell of three overs thereby ending Daredevils’ chances of putting up a sizeable total.

In another couple of deliveries, it was four down with Mahela Jayawardene (8) also back in the dug-out courtesy Albie Morkel.

Hilfenhaus’ first spell figures read 3-0-14-3 and he ultimately finished with three for 27 courtesy a few big shots by Yogesh Nagar in the penultimate over.

The slide started in the very first over as Hilfenhaus bowled a beauty that saw Sehwag’s stumps go for a walk. The ball pitched on the middle stump and moved a shade as Sehwag got squared up.

Warner didn’t get the required elevation as he hit one straight to Ashwin at mid-off. Ojha, who played a blinder couple of days back gloved one which Dhoni fumbled twice before clutching onto it.

The last chance of putting up a big score depended on Jayawardene but he committed early to a stroke to offer a simple catch to Mike Hussey at mid-on.

Venugopal did try his bit as he lofted Ravindra Jadeja for a straight six — the first of the match in the ninth over. The duo mainly played in singles and doubles but boundaries were hard to come by. Venugopal hit another straight six off left-arm spinner Shadab Jakati.

However a brilliant piece of work by Albie at short cover saw the back of Venu and it slowed things down further. Nagar scratched around and finally hit a four and a six off Hilfenhaus in the penultimate over but that didn’t boost the total significantly.