Chasing 154, Kolkata were cruising at 112-2 before losing five wickets for 35 runs to hand the defending champions a last-ball victory at the Chidambaram Stadium, which had hosted World Cup matches only a few days back.

Needing nine runs off the final over bowled by paceman Tim Southee, Kolkata could manage just six while losing one wicket.

“We took some time to think about the last ball instead of rushing through it,” said Southee. “We worked out our options and went for the right one with the field in mind in the end.”

Mahendra Singh Dhoni, who led India to World Cup victory last week, hugged his Chennai teammmates as cheergirls danced merrily in the background, marking a rollicking start for the tournament which was hit by scandals last year.

Jacques Kallis top-scored for Chennai with 54 off 42 balls.

Kolkata were playing with just two foreign players with Australia’s Brett Lee and Brad Haddin and Bangladesh spinner Shakib Al Hasan set to join the squad only after the end of a three-match one-day series in Dhaka next week.

Anirudha Srikkanth starred for Chennai, making a fine 55-ball 64 containing six fours and two sixes after losing his opening partner Murali Vijay in the first over.

Suresh Raina chipped in with a useful 33 and Dhoni carted 29 off 21 balls including two sixes in an over by legspinner Sarabjit Ladda.

Kolkata, the only team to have not made the semi-finals in any of the three previous IPL editions, were sloppy in the field with Yusuf Pathan grassing two simple catches and Eoin Morgan another at deep midwicket. It’s fine to be crazy about cricket, but let’s get our priorities right 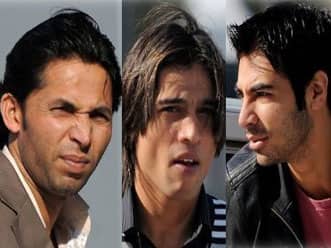