Virat Kohli's run out by Dwayne Bravo was the turning point.

RCB started quite shakily, losing Nic Maddinson early. AB de Villiers came in and timed the ball very well raising expectations of a demolishing innings. However, he was dismissed in the most unlikely way — off a juicy full toss! Ishwar Pandey was responsible for both these early RCB casualties. Live Cricket Scorecard: Chennai Super Kings vs Royal Challengers Bangalore, Match 37 at Chennai

Mandeep Singh was the next bat to be dismissed cheaply, thanks to swift work in the field by Pawan Negi who got out him run out. He was dismissed without getting to face a single delivery. His wicket brought Dinesh Karthik to the crease and along with Virat Kohli stitched a solid partnership. READ: Most dangerous batsmen in IPL

It appeared RCB would sail through for victory at 97 for three, but were royally shaken up when they lost both set batsmen consecutively. Kohli was dismissed in a brilliant fielding effort by Dwayne Bravo in his follow through. Kohli played the ball into his hands and Bravo gave a glimpse of his amazing reflexes by taking the ball and throwing it at the stumps in a flash. Replays showed Kohli was out of his crease. This was the turning point in the game.

Karthik then holed out to midwicket in the next ball of a fresh over from Ashish Nehra. The back to back wickets brought two new batsmen, Sarfaraz Khan and David Wiese, to the crease. All of a sudden things began looking increasingly difficult for RCB, with the asking rate creeping up to 10 and beyond.

The pressure started showing on the batsmen and they began getting out in a pack. Sarfaraz was caught at fine leg off Nehra’s bowling. Harshal Patel was then dismissed in the same over by Nehra. The asking rate crept up to 16 in the final two overs, with Wiese having Mitchell Starc for company at the other end.

Starc didn’t have the class to put away the well disguised slower balls from Dwayne Bravo and Mohit Sharma and got out scoring just one run from seven deliveries! Wiese was left to score 25 runs in the last over, but he got out of the very first ball from Bravo’s last over.

Earlier, CSK managed to post 148 for nine after the opening pair suffered a rare failure. Suresh Raina was the top-scorer for the CSK, smashing a timely half century.

Things started off very well for the RCB as Mitchell Starc got in a wicket maiden, dismissing Dwayne Smith for a duck. Brendon McCullum and Suresh Raina then built on a steadying partnership. McCullum wasn’t his usual destructive self and was dismissed by David Wiese for 20 off 15 balls.

Raina carried on gracefully however. Along with Faf du Plessis, he stitched a good partnership without allowing the momentum to dip. By the end of the partnership, the match was well back on track for CSK. RCB however pulled back the momentum in the 15th over as Harshal Patel got rid of both du Plessis and Raina. Raina had scored 52 by the time he was dismissed.

These wickets brought MS Dhoni and Ravindra Jadeja to the crease, both of whom have not been in top form throughout the IPL 8. Jadeja’s poor form didn’t lose it’s grip over him as he holed out to Virat Kohli at deep midwicket off Yuzvendra Chahal’s bowling for just three runs off four balls.

His wicket may have been a blessing in disguise as Pawan Negi came out and started striking the ball very well. Dhoni, at the other end played a fine knock off 29 from 18 balls before holing out to long on to give Wiese his second wicket. The wicket fell in the 19th over and Dhoni would have rued the missed chance to end the innings well.

The final over was bowled by Starc and he didn’t let the batsman add to much to the mediocre total. He even got the wicket of Dwayne Bravo on the third ball off a full toss! The batsmen only managed four runs in the end. 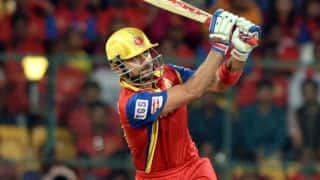