Chennai have won most matches against Royal Challengers Bangalore (14).

Chennai Super Kings (CSK) beat Delhi Daredevils (DD) quite comfortably in Match 30 of Indian Premier League (IPL) 2018. Not only did the win take them to the top of the points table in the ongoing edition of the tournament, it was also their 100th win in T20 cricket. In fact, CSK became only the second team in history to reach the landmark, after Mumbai Indians (MI), who are on 104. CSK came into the tournament with 94 wins, one behind four English counties Hampshire, Lancashire, Nottinghamshire, and Warwickshire. All of them had slid to third spot after CSK s second win of the tournament.

The list consists of three Indian and seven English teams. This is not surprising: while T20 had started in England way before anywhere else, IPL features more matches than any tournament.

Chennai have won most matches against Royal Challengers Bangalore (14). They have also won 12 against Delhi Daredevils (today was their 12th), Kolkata Knight Riders, Mumbai Indians, and Rajasthan Royals, and 11 against Kings XI Punjab. Of non-IPL teams, they have won 2 matches against Warriors, the South African franchise (in Champions League T20), the most. 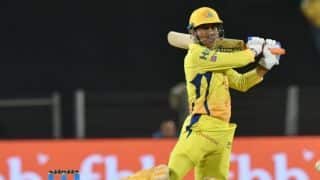 IPL 2018: MS Dhoni has word of caution for CSK bowlers despite victory over DD