Chennai Super Kings (KXIP) avenged the defeat they suffered in the Indian Premier League (IPL) 2014 playoffs by clinching a 65-run win against Kings XI Punjab (KXIP) in the second semi-final of Champions League Twenty 20 (CLT20) 2014. They will now face Kolkata Knight Riders (KKR) in the finals at Bangalore on October 4.

Virender Sehwag fell early in the chase, hitting a Mohit Sharma delivery straight into the hands of Brendon McCullum. The KXIP opener wasn’t convinced that McCullum had taken it cleanly and stayed rooted to his crease. The umpire referred the third umpire, and replays suggested that it was indeed out.

Manan Vohra and Wriddhiman Saha then combined to string together a scrappy partnership, until 35-year-old Ashish Nehra came in and showed the world that his four wickets against Kolkata Knight Riders (KKR) wasn’t a fluke. Nehra sent Saha packing, and then took the prize wicket of dangerous Glenn Maxwell.

The misery continued for KXIP, as Mohit Sharma then made the dismissal of Manan Vohra to leave the IPL runners-up reeling at 24 for the loss of four wickets. Skipper George Bailey and Thisara Perera too failed to provide any resistance and followed the earlier batsman.

David Miller hit a few shots, but the target was too steep and he too couldn’t hang around for much longer and was bowled by Ravichandran Ashwin. Akshar Patel did play some shots towards the end, and expressed his all-round ability once again. However, his effort was not enough, and he too was bowled by a Raina delivery. 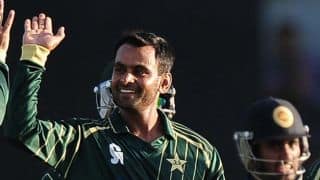