Chennai are at 23 for no loss after three overs against Delhi in the IPL 2014.

Chennai Super Kings (CSK) are at 23 for no loss after three overs against Delhi Daredevils (DD) in the Indian Premier League (IPL) 2014. Openers Dwayne Smith is batting on 13 and Brendon McCullum is on nine. Chennai captain MS Dhoni had won the toss and elected to bat in Match 8 of IPL 7. Kevin Pietersen is still out with his finger injury, so, Dinesh Karthik leads Delhi.

Dwayne Smith and Brendon McCullum opened the batting for Chennai. JP Duminy began proceedings for Delhi. Nathan Coulter-Nile went into the dressing room to get treatment after injuring himself while sliding in and fielding a run in the first over itself. Whether that changed Delhi and Dinesh Karthik’s plans one may not know, but it was certainly a blow to lose a strike bowler.

Mohammed Shami shared the new ball with Duminy. His first ball was pulled by Smith in front of deep square-leg for a four. The next ball struck high on the pads and Shami appealed. The umpire, however, said not out. Replays showed that it was a much closer. Smith then drove a full delivery through cover for another four.

Shahbaz Nadeem was brought into bowl the third over. McCullum gave him the charge and lofted one over mid-off for a four. 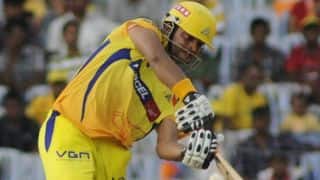