MS Dhoni was looking dangerous at the crease, with the score at 150 for four.

After Suresh Raina had laid a solid platform with a solid half-century, Chennai skipper MS Dhoni decided to cut lose. Dhoni started steadily but went after Jaydev Unadkat with a cracking six, a helicopter shot that lifted the capacity crowd and caressed through the off-side for a boundary. Du Plessis was not holding back either with smashing six over the longest part of the ground off Mohammad Shami. Du Plessis tried once again to clear the boundary but the ball ended safely in the palms of Murali Vijay at long on.

Dhoni,who crossed over slammed a delivery that was short and wide over the third man boundary for another six. Ravindra Jadeja is the new batsman at the crease.

Earlier, Chennai Super Kings won the toss and elected to bat first. Chennai made three changes from their first encounter against Kings XI Punjab. Ben Hifenhaus, Ishwar Pandey and Mithun Manhas come in place of Dwayne Bravo, Ashish Nehra and Pawan Negi. Delhi, on the other hand went in with an unchanged line-up from their win Kolkata. 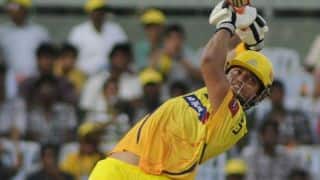