Raina was dismissed by a miscued pull shot.

Suresh Raina’s big hitting took a small break in the 14th over as the Dolphins bowlers continued to toil for wickets and subsequently stem the flow of runs. There was a second where it looked like Raina was going to be caught in the deep by Daryn Smit, but the fielder’s valiant effort bit the dust as the ball went wide of him and hit the fence for another boundary. Raina was closing in on his hundred.

Earlier, Suresh Raina was unanimously voted by Indian fans across the nation as the most consistent T20 batsmen in the world and the packed Bengaluru stadium bore witness to a rain of sixes from the Indian southpaw and Raina was toying with the bowlers at the Chinnaswamy stadium. He reached his fifty and simply went berserk after that as the spectators were ducking for cover as he was iniching closer to a century.

Earlier, Brendon McCullum was threatening to take the game away from the opposition and the Dolphins got a much needed breakthrough when the New Zealand skipper could’nt get the elevation on the shot and the ball bobbed up high in the air and was safely pouched by the deep square leg fielder. The tenth over was tidy and only six runs came of it.

After the powerplay overs, Dolphins were hoping they could claw their way back into the contest but there was no respite from the continous bombardment of boundaries that were lauched off Suresh Raina and Brendon McCullum’s blade. Alexander’s medium pacers were easily dispatched by the batsmen and the fifth and sixth sixes of the partnership brought yet another 19 run-over. Raina slammed yet another big six and the score moved to 99 in just eight overs.

Earlier, Brendon McCullum’s assault on the bowlers went higher by a few notches and boundaries came thick and fast for the Chennai Super Kings (CSK) in the eight match of the Champions League Twenty20 (CLT20) as 19 runs wers scored from Kyle Abbott’s over, which was the fifth in the innings. The bowler was trying to pitch it short and the New Zealander, who is so adept at pulling and hooking muscled the ball many a mile on the leg side and Raina also got onto the act later with a hook shot that got him a boundary.

McCullum went after pacer Craig Alexander’s bowling right from the word go. A hint of width was offered and the New Zealand skipper cracked to back-to-back boundaries on the off-side. Then McCullum went one better as he stepped down the track and belted the ball over long-on for a big six. Suresh Raina went one better in terms of sheer muscle in Kyle Abbott’s over. He stepped down and hammered a big six over the extra cover boundary and then a misfield at point leaked yet another four. McCullum’s assault continued and he flicked off his pads effortlessly for the ball to hit the boundary fence again.

A packed crowd in Bengaluru greeted the two teams in the eight match of the Champions League Twenty20 (CLT20) and after a watchful couple of balls, Dwyane Smith launched into the attack and it was a big six back over the bowler Keshav Maharaj’s head and Chennai Super Kings (CSK) was on the march. This was over the long on region. Maharaj again offered some flight and a hint of turn got the toe edge of Smith’s bat and the ball was high up in the air and and Khaya Zondo at long off. The second over was by the tidy Kyle Abott  offered very little from the two aggressive batsmen off the first five balls. Then, Abott strayed in line and Raina flicked away to the leg side boundary to get things going 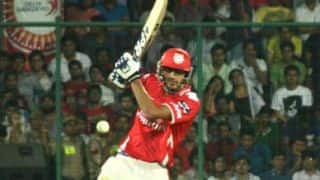