Catch the Live Cricket Score of CLT20 match between Dolphins and CSK here.

A formidable Chennai Super Kings (CSK) side will be hungry to open their account on the points table as they face Dolphins in the Group A match of the Champions League T20 (CLT20) 2014 at Chinnaswamy Stadium, Bengaluru on Monday. CSK suffered a loss at the hands of Indian Premier League (IPL) 2014 champions Kolkata Knight Riders (KKR) while Dolphins were stunned by the Mitchell Marsh cameo.

Both teams couldn’t have asked for a better venue to look for their first win. The Bengaluru wicket is known for being a batsman’s paradise. But the mindset will be completely different coming in to this game. Under MS Dhoni, this CSK side has encountered countless challenges. But the ‘been there, done that’ confidence often helps them emerge out of many troubles. Catch the Live Blog of the match here

Against KKR, things went according to plan while defending 157. Out of the blue, Andre Russell sprang up to hammer his way to a fifty. If there are any vulnerable areas for CSK, then their bowling has to be one of them. Despite picking five early wickets, Russell and then Ryan ten Doeschate managed to slog at ease. A similar CSK bowling line-up was taken apart frequently in the IPL 2014. However, that doesn’t cover up for the fact that CSK should’ve posted much better than the par score at Hyderabad. 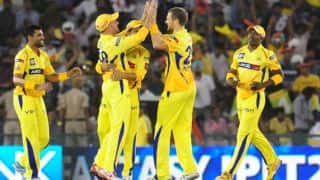 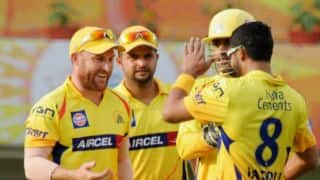