Chennai Super Kings have started off their first IPL 2014 encounter, against Kings XI Punjab in magnificent fashion, amassing 102 for no loss in the first 10 overs. Both of CSK’s openers, Brendon McCullum and Dwayne Smith have looked exquisite in their timing and explosive in their shot making. McCullum, in particular has dispatched all the bowlers all over the Abu Dhabi stadium.

The New Zealand captain brought up his fifty in the eighth over of the innings with a boundary off Rishi Dhawan. The duo brought up their 100-run partnership in the 10th over, and are going at more than 10 runs an over.

Opening the batting for the Chennai Super Kings, Dwayne Smith and Brendon McCullum batted brilliantly in the powerplay overs, amassing 70 in the first six. Both of them started off well against spinner, Akshar Patel, who opened the bowling for the Kings XI Punjab. They managed nine runs off the first over. Parvinder Awana started the attack alongside spinner Patel. And he too wasn’t spared by McCullum in his first over. He greeted the Indian pacer with a six and a four off consecutive deliveries. Awana then lost his line and conceded a couple of wides in the same over.

Mitchell Johnson then came into the attack in the third over. He too was treated with disdain by both the batsmen as Smith hit him for a four and six in his very first over. Awana continued and both batsmen have teared him apart so far.

McCullum has brought up 5000 runs in Twenty20 cricket as well. 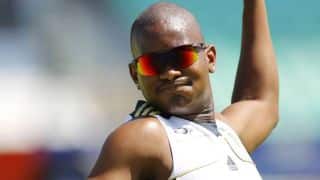