All of Punjab's hopes rest on Maxwell and Miller now.

Chasing Chennai Super Kings‘ mammoth 205 for four, Kings XI Punjab are placed at 93 for the loss of three wickets at the end of the 10th over in their IPL 2014 encounter at Abu Dhabi. While they have still kept the required run rate from shooting up, the fact that they have already lost three wickets will probably hold Glenn Maxwell and David Miller back a bit.

Maxwell has been the attacker for Punjab so far, scoring the bulk of the boundaries, but MS Dhoni will be well aware of Miller’s pyrotechnic abilities as well. The CSK captain will be hoping for one wicket here to open the floodgates towards the Punjab tail.

Ashish Nehra’s drop of Maxwell in the 10th over must be frustating Dhoni.

Earlier in the innings, opening the batting for Punjab, Virender Sehwag and Cheteshwar Pujara started off cautiously against Ashish Nehra in the first over, accruing just three runs. Bespectacled Sehwag opened up his arms from the second over. He hit his first four of IPL 7 against Mohit Sharma, and then followed that up with his second in the same over. Luckily, he was dropped by Dwayne Bravo in the same over.

Complementing Sehwag, Pujara too opened up and hit Nehra for a couple of boundaries in the third over. Sehwag followed him by hitting two more in the same over before losing his leg stump to Nehra.

Sehwag’s dismissal has brought Maxwell to the crease, who has made his intentions very clear already.

Ravichandran Ashwin, introduced in the fourth over, picked up the wicket of Pujara in his very first over. Punjab will be hoping for some real fireworks from Maxwell here. But it was a surprise to see Akshar Patel coming in at No 4 before George Bailey or David Miller. 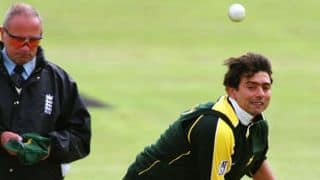