MS Dhoni was the other protagonist of the chase, scoring 26.

Michael Hussey turned the back the clock with a composed half-century as Chennai Super Kings (CSK) overcame a spirited Royal Challengers Bangalore (RCB) in Qualifier 2 of Indian Premier League (IPL) 2015 at Ranchi on Friday. With this win, CSK reach their sixth IPL final. RCB ran CSK very close, taking the match down to the penultimate over. Yuzvendra Chahal was the pick of RCB’s bowlers with two for 28 in four overs. Scorecard: Chennai Super Kings vs Royal Challengers Bangalore

In the absence of Brendon McCullum, Hussey stepped up with a terrific half-century. He brought all his experience to the fore, and played with a calm head. His composed 56 came off 46 balls three fours and two sixes. Dwayne Smith had started well earlier on, scoring 17 off 12 with three boundaries. Updates: Chennai Super Kings vs Royal Challengers Bangalore

Faf du Plessis was dropped very early in his innings, and he made RCB pay. Chris Gayle was the guilty man, dropping a sharp chance at slip. He went on to churn the runs around, scoring 21 off 22 with two boundaries. He was bowled by Chahal, trying to dab one down to fine leg and missing. That brought in Suresh Raina at No. 4, but for once the CSK maestro failed in a knockout match, holing out to David Wiese for a two-ball duck. IPL 2015 Highest run-scorer: List of best batsmen in IPL 8

At 61 for three in the 10th over, MS Dhoni walked out to join Hussey. Another wicket at that time would have proven to be an absolute game-changer, but the two calmest heads in the CSK line-up put on 47 to guide CSK closer. Hussey was out with over 30 runs to make from less than four overs, but Pawan Negi played a couple of big hits and Dhoni did what he does best: finish games. He was out with one run to win, but he had done enough to ensure a CSK win. IPL 2015 Highest wicket-taker: List of best bowlers in IPL 8

Earlier, Ravichandran Ashwin and Ashish Nehra led the rout, as CSK restricted RCB to a manageable 139 for eight. Ashwin was at his skilful best, tying down Chris Gayle with a spell of one for 14 in four overs. At the other end, Ashish Nehra continued his love for RCB, snaring two massive wickets in his first three overs and coming back to take a third later on. He finished with three for 28 in his four overs, accounting for Virat Kohli and AB de Villiers in the same over, and Dinesh Karthik later on. IPL 2015 Most 6s and 4s: List of most dangerous batsmen in IPL 8

Gayle and Kohli opened as usual, and started off sedately. They put on 23 in four overs before Nehra struck with the first ball of the fifth, getting Kohli to play one right into the hands of Mohit Sharma at fine leg. Five balls later, de Villiers was struck in line though replays suggested that the ball had pitched just on leg. RCB were now 25 for two in five overs. IPL 2015 most dismissals by wicketkeeper: List of best wicketkeeper in IPL 8

Mandeep Singh came in at No. 4, but was unable to replicate the innings he produced in the Eliminator. He was Ashwin’s sole wicket, but the credit ought to go to Michael Hussey. Mandeep went for a sweep, but was caught by a diving Hussey at backward square. Dinesh Karthik and Gayle then put on the only substantial stand for RCB. The duo added 44 before Gayle’s resistance came to and end. He hit Suresh Raina for two sixes before top-edging another that was caught by the bowler. Sarfaraz Khan then came in to join Karthik, but their alliance was a brief one. Karthik became Nehra’s third wicket, as RCB never built momentum. IPL 2015 Leading fielders: List of Best fielders in IPL 8

David Wiese hit a big six but did little apart from that, holing out to Dwayne Bravo off Mohit Sharma. Wiese had earlier been dropped off Bravo’s bowling. Sarfaraz kept fighting, scoring 31 off 21 balls, but in the end there was far too much for him to do, as CSK restricted RCB to a chaseable total. Indian Premier League (IPL) 2015: Complete coverage

Man of the Match: Ashish Nehra 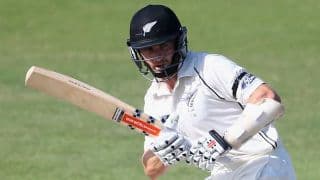 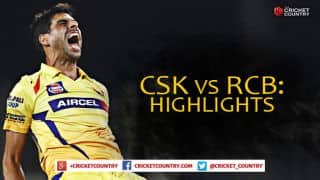