Ranchi: Ahead of their Qualifier 2 match against Royal Challengers Bangalore (RCB), Chennai Super Kings (CSK) coach Stephen Fleming believes their top-order batting needs to collectively fire in the crunch game to make it to the final against Mumbai Indians on Saturday. CSK vs RCB, IPL 2015 Qualifier 2 at Ranchi: Preview

“Our batsmen are getting out at the wrong time.. we are losing more wickets than we have lost in the previous IPL seasons. So we are seeing lots of batsmen having to play innings of substance when all we need is for our top four or five to get the majority of runs,” Fleming was quoted as saying by iplt20.com on Thursday. AB de Villiers: Chennai Super Kings will be tough to beat in IPL 2015 Qualifier 2

“That has probably been the difference this year, as compared to other years, we have fallen short on top-order runs. We have a chance of rectifying that now and we have a very good top-order to do that,” he said. Mumbai Indians qualify for IPL 2015 final with 25-run victory over Chennai Super Kings in Qualifier 1

The coach also said except for Brendon McCullum, the other top order willowers have been below par in this edition and that they need to fire on Friday at the JSCA International Stadium.

“Except for Brendon McCullum, who scored 400-plus runs, all our other batsmen are down from where they usually would be. We want our entire batting order to fire tomorrow. Bowling, on the whole, I think has done pretty well,” he said.

Fleming also stated the tricky Chennai wicket had led to the off-form of the batsmen but believes they can get back to their own on the match day. “It is also because we have been playing on the difficult Chennai wicket where it is hard to find any form. The guys have worked hard to get some fluency back in their game. They can take their time but we are running out of it. Hopefully, we can do it in this game,” he said.

The former New Zealand skipper is also wary of the AB de Villiers threat to his team, saying one has to be on the mark from ball one against the South African.

“You can make as many plans as you like but he (de Villiers) is such a good player. He is the world’s best player and against him, you have got to hold your nerve, have a bit of courage and also be ready to take the opportunity when it comes by. You cannot give him two bites at the cherry and have to be absolutely on the mark from ball one,” said the 42-year-old.

“Virat (Kohli) will look to bat through and he is a wonderful player. But A.B. is certainly the guy who will take the game away from you.” The CSK coach felt the scenario is perfect for the team to book a berth in yet another IPL final given they are more acclimatized to the conditions and wicket in Ranchi than their opponents.

“We played a lot here last year and it was a key part of our season. There is some attachment as well with this place being the skipper’s home town, but as a team it is important that we do the job, no matter what the surroundings are. If you don’t play well, you don’t get the goodies.”

“We are confident that we have got a good game in us and the surroundings will suit us. Playing Mumbai in Mumbai is hard but coming to Ranchi to get to another IPL final is a great opportunity. It is all there for us and we just need to make it count,” he said. 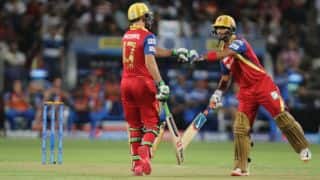